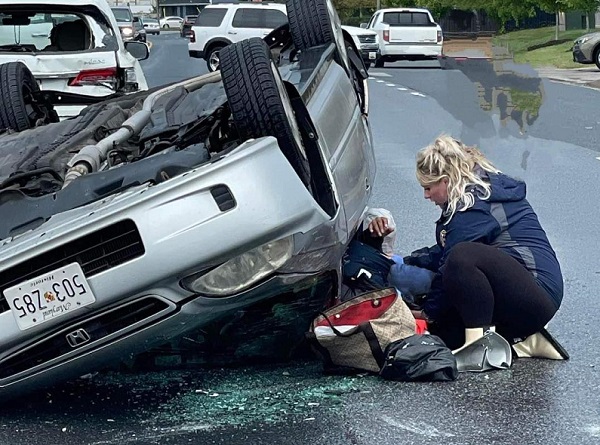 
BOWLEYS QUARTERS, MD—Not all heroes wear capes.  A Bowleys Quarters firefighter is making national headlines after she was involved in a car accident, helped another trapped motorist, and gave birth less than 24 hours later.

Megan Warfield, 30, is a member of Bowleys Quarters Volunteer Fire Rescue & Marine and is also a career firefighter with Baltimore County. She has been serving in an administrative capacity for the past several months patiently waiting on the birth of her child.

On October 3, Megan had just finished organizing and hosting her late father’s second annual memorial golf tournament when she was a passenger who became involved in a significant motor vehicle accident.

Instinctively, Megan immediately exited her mangled vehicle and began providing care to a person who was trapped by their overturned car. Megan stayed with this individual until rescue crews arrived to free them.

After all patients were evaluated, Megan agreed to an evaluation herself.  Less then 24 hours later, Megan delivered a beautiful baby girl.

“I started to climb in there with her, but then I was like, ‘What are you doing? You’re nine months pregnant,’” Warfield told TODAY. “I ended up holding onto her to keep her in place because I wasn’t sure of her injuries at the time.

“It was also important that I keep her calm,” Warfield added. “It was a pretty traumatic event.”