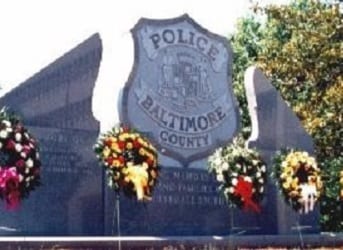 On April 29, the Baltimore County Police Foundation honored 18 sworn officers and two civilians for exceptional service at its annual awards ceremony. The honorees included Officer Amy Sorrells Caprio of the Parkville Precinct for the selfless actions she displayed when she responded to a call for a suspicious vehicle in a Perry Hall community in May 2018. Officer Amy Caprio was posthumously awarded the Valor Award.

Master of Ceremonies Stan Stovall hosted the awards dinner at The Valley Mansion, located at 594 Cranbrook Road in Cockeysville. The event began at 6 p.m. for a meet and greet, dinner was at 7:30 p.m. and the awards presentation began at 8:15 p.m. County Executive Johnny Olszewski, Chief Terrence B. Sheridan and Stephen P. Somers, Foundation President, presented the awards. The benediction and invocation were offered by the Reverend Herbert Watson.

On May 21, 2018, Officer Caprio responded to a call for a suspicious vehicle in a Perry Hall community within the precinct. Another call confirmed that a burglary was taking place and four unknown suspects associated with the stolen Jeep Wrangler were involved. Officer Caprio found the Jeep and followed it into the cul-de-sac. When she arrived, she exited her car with her weapon drawn, then ordered the suspect out of the Jeep. The suspect appeared to be exiting the vehicle per her orders. As she approached, the suspect jumped back into the vehicle and aimed the car at the officer. Officer Caprio fired one shot into the vehicle in an attempt to stop him. The driver accelerated toward the officer, fatally striking her.

Officer Caprio was killed in the line-of-duty. She was presented the Valor Award for her courage and selfless actions during this incident.

The awards program began in 1980 as a way to recognize the Police Department employees for outstanding performance and to strengthen the relationship between the business community and the Department. The Baltimore County Police Foundation contributes resources, including seed money and in-kind services, for the development of new projects.

All members of the department, both professional staff and sworn, are eligible for nomination.

A memorial service to honor Baltimore County police officers who died while performing their duties will take place on Friday, May 10 at 10 a.m. The service will take place at Patriot Plaza, 401 Bosley Avenue, Towson 21204.

County Executive Johnny Olszewski, Baltimore County Police Chief Terrence B. Sheridan, government dignitaries and the families of the fallen will attend the service.

Ten wreaths will be placed at the memorial by the Police Department Honor Guard. The ten wreaths are in memory of the ten fallen officers.

This year the tenth wreath in honor of Officer Amy Sorrells Caprio will be placed by the officer’s family.


Officer Amy Sorrells Caprio
On May 21, 2018, Officer Amy Sorrells Caprio, 29, responded to a call for a suspicious vehicle with multiple suspicious subjects walking around homes on Linwen Way in Precinct 8/Parkville. When she arrived and located the vehicle, she got out of her police car and ordered the driver to exit the vehicle. Instead, the driver accelerated and fatally struck Officer Caprio. She was nearly a four-year veteran of the Department and was married. Officer Caprio is the first female line-of-duty death in the Department’s history.