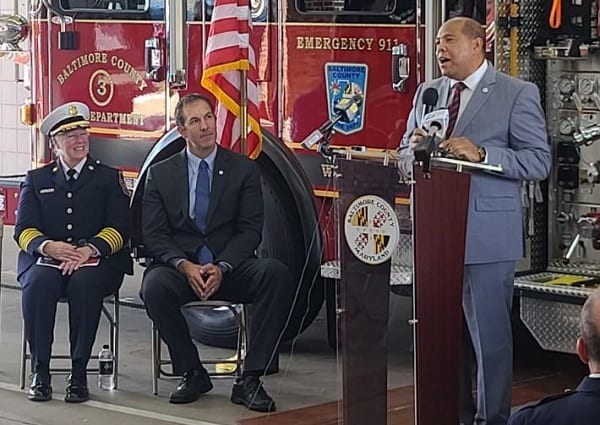 A press briefing introducing the new apparatus was held on Wednesday, July 7th.  County Executive John Olszewski Jr. and Fire Chief Joanne Rund were in attendance at the event.

The new apparatus replaces existing units that have aged out of their usefulness and was purchased under the Department’s apparatus replacement schedule. Some of these units are now in service; the rest will be placed in service in the near future.

Officials say all apparatus was designed with state-of-the-art safety features specific to the type of apparatus and features the Department’s distinctive new black-over-red color scheme.

New apparatus that is ready or near ready for service now:

Partially funded through a federal Assistance to Firefighters grant. Manufactured by Florida-based Wheeled Coach with a Freightliner chassis common to all our medics. Assigned to Towson Station #1, Franklin Station #56 and Edgemere Station #9. These units were designed for bariatric patients; they replace units that were retrofitted for bariatric needs

Manufactured by Wheeled Coach. Medic units are the most heavily used pieces of equipment in the Fire Service. In 2020 we responded to 96,723 EMS calls (out of a total 134,442 calls for service).

Built by Pierce Manufacturing of Wisconsin. Nine of the engines hold 750 gallons of water; seven hold 1,000 gallons. All are compliant with National Fire Protection Association standards and are equipped with new hose, nozzles, air bags, and the HAAS alert system to let motorists know when active fire units are ahead. Seven have been placed in service (Pikesville, Golden Ring, Woodlawn, Perry Hall, Dundalk, Catonsville and Texas).


Built by Pierce Manufacturing. These trucks articulate in the middle, which make them more maneuverable. The ladder reaches 107 feet high, the highest we’ve ever used. Compliant with NFPA safety standards. Equipped with upgraded rescue tools, including battery-operated saws that comply with the Administration’s “green” initiatives. Equipped with HAAS alerting system. Assigned to Halethorpe, Westview and Eastview stations.

Built by Pierce Manufacturing. Assigned to the Texas station, home of our tactical rescue experts and USAR. The tower operates from the middle, rather than the rear, of the truck, which provides a tactical advantage during fire operations. Equipped with HAAS alerting system and battery-operated tools.

One is a 24-foot boat that replaces an existing unit. The other is a 30-foot boat that is new to the Department. Both are assigned to the Texas station and due for delivery this fall.

These are 2020 Ford Expeditions equipped with encapsulated storage for safe transport of contaminated PPE (personal protective equipment). They are assigned to battalion and deputy chiefs and EMS supervisors.

The following are scheduled for delivery in 2022: