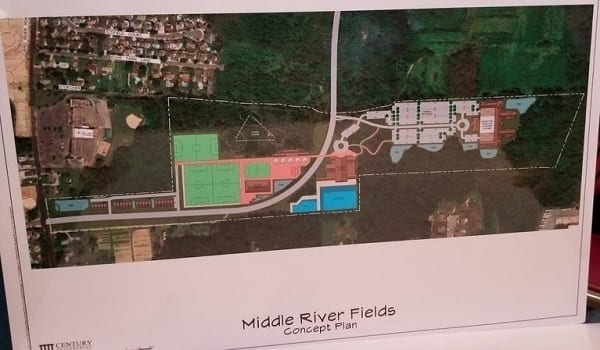 MIDDLE RIVER, MD – A group of local residents has come together to oppose a proposed sports complex on Campbell Boulevard.

A Change.org petition created by the Preserve at Windlass Run HOA Board calls for residents to “say no” to the proposed complex.

“The Preserve at Windlass Run HOA board members have come to the conclusion that the proposed Sports Complex will bring many negative issues, while only providing a few benefits to our community,” reads the petition. “We as a community include 409 homes and pay over $2 million in property taxes each year. Let us band together so that our voices are heard by the politicians and developers that are trying to develop this large complex.”


The HOA board cites increased traffic, noise levels from PA systems, a potential bus route, potential alcohol sales, and litter among the reasons to oppose the project.

The board went on to say that, if the complex were to be built along Route 43 instead of along Campbell Boulevard, they would support the project.

As of Tuesday afternoon, the petition had over 350 signatures.

7/11 Day: Get a free Slurpee at 7-Eleven
Perry Hall Forecast