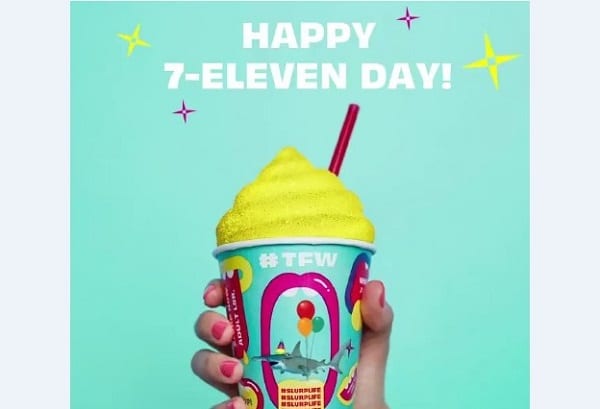 On July 11, 7-Eleven stores around the U.S. offer customers a free small Slurpee, no strings attached.

Machines to make frozen beverages were invented by Omar Knedlik in the late 1950s. The idea for a slushed ice drink came when Knedlik’s soda fountain broke down, forcing him to put his sodas in a freezer to stay cool, which caused them to become slushy. The result was popular with customers, which gave him the idea to make a machine to help make a “slushy” from carbonated beverages. When it became popular, Knedlik hired artist Ruth E. Taylor to create a name and logo for his invention. She created the ICEE name and designed the original logo, which is used today. Early prototypes for the machine made use of an automobile air conditioning unit.


After a successful trial of ICEE machines in 100 stores, 7-Eleven in 1965 made a licensing deal with The ICEE Company to sell the product under certain conditions. Two of these were that 7-Eleven must use a different name for the product, and that the company was allowed to sell the product only in 7-Eleven locations in the US, a non-compete clause ensuring the two drinks never went head to head for distribution rights. 7-Eleven then sold the product that in 1966 became known as the “Slurpee” (for the sound made when drinking them). The term was coined by Bob Stanford, a 7-Eleven ad agency director.

And the rest is history…so head out and get your free “brain freeze” today!

To find a 7-Eleven location near you, visit this link.