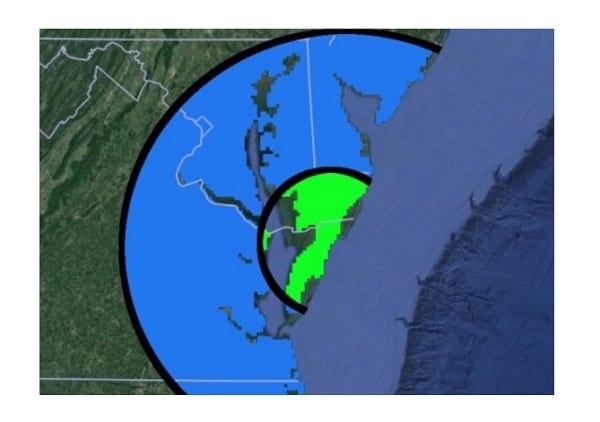 
NOTTINGHAM, MD—If the predicted storms clear out in time, a NASA rocket launch may be visible in the Nottingham area on Wednesday night.

A rocket mission launching on May 26 will study radio waves that escape through the Earth’s ionosphere impacting the environment surrounding GPS and geosynchronous satellites, such as those for weather monitoring and communications.

Launching from NASA’s Wallops Flight Facility, a Terrier-Improved Malemute suborbital sounding rocket will carry the Vlf trans-Ionospheric Propagation Experiment Rocket, or VIPER. The mission is scheduled for 9:15 p.m. on Wednesday night. The launch window is 9:15 p.m. to midnight EDT and the backup days are May 27-28. The launch may be visible in the mid-Atlantic region.

VIPER is studying very low frequency radio, or VLF, waves that are produced by both natural (e.g. lightning) and artificial means. During the day these waves are trapped or absorbed by the Earth’s ionosphere. At night, however, some of the waves escape through the ionosphere and accelerate electrons in the Van Allen Radiation Belt.

“At night, the lower layers of the ionosphere are much less dense, and more of the VLF can leak through, propagate along the Earth’s magnetic field lines, and end up interacting with the high energy electrons trapped in the Van Allen Radiation Belts,” said Dr. John Bonnell, the project’s principal investigator from the University of California, Berkeley.

Live coverage of the mission will be available on the Wallops IBM video site beginning at 8:55 p.m. on Wednesday night.

The NASA Visitor Center at Wallops will not be open for launch viewing.

The timeline for viewing Wednesday night’s rocket launch can be viewed below.