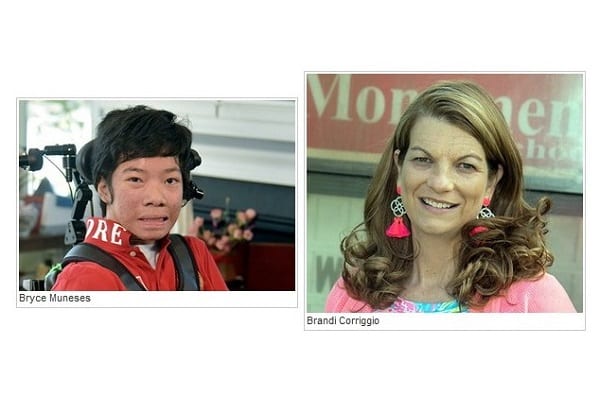 An awards video was released online on Oct. 29.

Muneses suffered a stroke as an infant that limited his ability to control his arms and legs. He was nominated for the honor by Lori Ludwig.

Ludwig wrote: “I met Bryce when he started kindergarten at Chapel Hill Elementary School and had the honor of being his assistant throughout his time in elementary school. He liked to refer to me as his sidekick.”

She describes Muneses as “the picture of positivity, perseverance, and strength” and an excellent student. “Bryce is an inspiration to all,” she wrote. “He exudes positivity. Never does he let his inability to do something stop him from achieving his goal; he simply finds another way to get it done. . . . Other students learned a lot about patience and compassion from Bryce. . . . Often (at Chapel Hill Elementary) I hear how he has inspired someone having a rough day to keep trying even now that he has moved on. He has made quite an impression on all who know him.”

Corriggio is the elementary team leader, school testing coordinator, Individual Educational Program (IEP) chair, and job coach at Battle Monument School. The Dundalk school is a public day school for students between the ages 3-21 years old who have significant intellectual disabilities. Corriggio also serves on the school’s Instructional Leadership Team, Crisis Team, and Equity Committee. She began her career at Battle Monument in 2005 as a Preschool-3, Pre-Kindergarten, and Kindergarten teacher.


As job coach for Battle Monument, Corriggio works with the BCPS transition coordinator to identify worksites and complete all required paperwork. Prior to taking students to their worksites, she develops a plan to teach them aspects of the work assignment. She also collaborates with classroom teachers regarding which students are ready to work. Franklin Square Hospital, Red Brick Station, and The Exchangeree at White Marsh are a few of the partnerships Corriggio has developed. Some placements have resulted in employment opportunities for students when they leave the school system at age 21.

“I think Ms. Corriggio is an ideal candidate for the Baltimore County Teacher of the Year,” wrote Battle Monument Principal Jerry Easterly in nominating her. “She is a strong advocate for students with intellectual disabilities. She is poised and confident, both qualities that I consider necessary for the Teacher of the Year.”