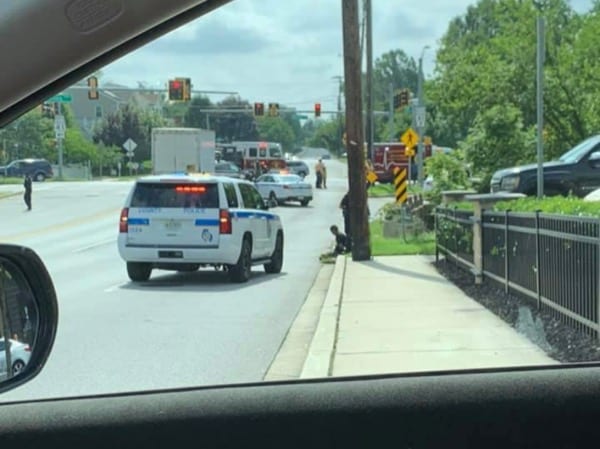 UPDATE 2: Police say two juvenile suspects assaulted three victims with an aerosol spray. One victim was sprayed through her open car window. The suspects then continued driving around and assaulted two more victims with the spray, one who jogged outside and another who had just walked out of her home.

The suspects saw responding officers and quickly drove away, fleeing the scene. Shortly afterward, the suspects crashed into another car traveling on Perring Parkway near Taylor Avenue (21234).

The suspects ran from the vehicle but were arrested by officers a short distance away.

Officers are investigating the suspects for other unrelated crimes. The driver of the car the suspects crashed into was not injured.

UPDATE: The suspects were apprehended in the area of Perring Parkway at Taylor Avenue following an unconfirmed third incident which reportedly involved fecal matter. Another potential incident on Ebenezer Road is also being investigated

———
PERRY HALL, MD—Suspects are reportedly in police custody following a pair of Sunday morning assaults in the Parkville and Perry Hall areas.


At around 10 a.m., a man was walking along Silver Spring Road when a vehicle swerved into oncoming traffic and reportedly sprayed the man with pepper spray.

A short time later, a motorist was stopped at a traffic light in the area of Honeygo Boulevard at Silver Spring Road with their window down. An individual approached the driver and sprayed her with a “burning substance” that was in a spray bottle.

Two suspects are in custody, according to the Baltimore County Police Department. It was not immediately clear if the suspects were connected to both incidents.

“I can confirm an arrest has been made,” said Councilman David Marks. “Exceptional work by our police, and I am truly sorry for those impacted by these attacks.” [Photo via a NottinghamMD reader]