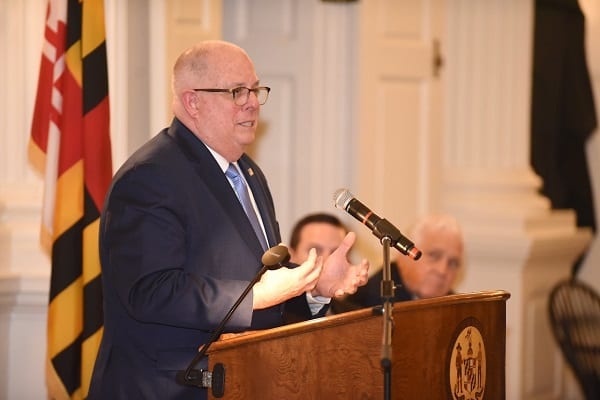 ANNAPOLIS, MD—Governor Larry Hogan wrote a letter to President Donald Trump on Tuesday accepting his offer to allow the state of Maryland to utilize federal labs for COVID-19 testing and to request guidance on how to move forward with this federal-state collaboration.

“Maryland is fortunate to have a plethora of federal installations with the potential to play a critical role in increasing our testing capacity, including Aberdeen Proving Ground, Fort Detrick, Fort Meade, the National Institutes of Health, and the Walter Reed National Military Medical Center,” wrote Governor Hogan in Tuesday’s letter. “These federal labs can be key to our utilizing the 500,000 tests we recently acquired from South Korea and our comprehensive recovery plan to get Marylanders back to work as safely and quickly as possible.”

On Monday, after weeks of diplomatic discussions and procurement negotiations, Governor Hogan announced that Maryland had acquired 500,000 COVID-19 tests from South Korea’s LabGenomics at a cost of approximately $9 million.

“These federal labs can be key to our utilizing the 500,000 tests we recently acquired from South Korea and our comprehensive recovery plan to get Marylanders back to work as safely and quickly as possible,” wrote Governor Hogan. “I was grateful to hear of your generous offer to allow the State of Maryland to access these federal labs for our testing. I am writing today to personally thank you and the Vice President and to request guidance on how we can immediately proceed on this important federal-state collaboration.”

In the letter, Governor Hogan noted that on March 15, the leaders of Maryland, Virginia, and Washington DC wrote directly to the president to request a federally-supported testing site in the region.

Vice President Mike Pence added that “there is sufficient capacity of testing for any state in America.”

Governor Hogan has given no indication as to when he plans to lift the lockdown restriction in the state of Maryland, despite the fact that the curve appears to be flattening.

Attorney General William Barr said on Tuesday that the Justice Department will consider taking legal action against governors who continue to impose stringent rules for dealing with the coronavirus that infringe on constitutional rights, according to Bloomberg.

Governor Hogan’s full letter to President Trump can be viewed below.