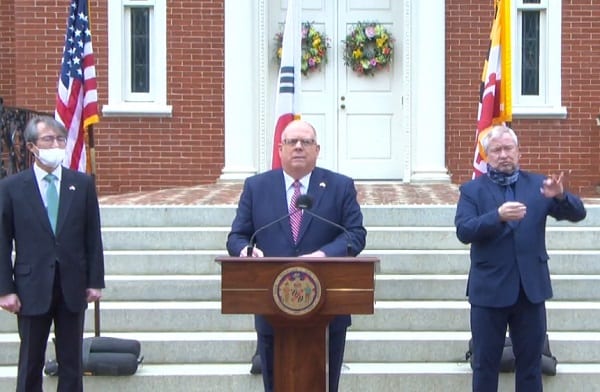 The governor began by stating that, from the beginning of the crisis, one of the biggest challenges for Maryland has been the lack of availability of testing. Adequate testing is one of the four critical building blocks of the governor’s “Maryland Strong: Roadmap to Recovery.”

The state has successfully expanded testing capability by over 5,000 percent and has now completed over 71,000 tests to date. Last week, Maryland secured an additional 40,000 tests and the state invested $2.5 million to help the University of Maryland lab handle up to 20,000 tests per day.

On Saturday morning, Governor Hogan and First Lady Yumi Hogan stood on the tarmac at BWI Airport to welcome a Korean Air plane carrying LabGun COVID-19 PCR test kits from LabGenomics. It was the first-ever direct freight flight from Incheon Airport to BWI.

Maryland has acquired 500,000 tests from LabGenomics. This 500,000 test capacity is roughly equal to the total amount of testing that has been completed by 4 of the top 5 states in America combined, according to Governor Hogan.

This acquisition effort began on March 28 when the First Lady and the governor called Korea’s Ambassador to the U.S. and spoke of the “special relationship” between Maryland and the Republic of Korea. That call set in motion 22 days of round-the-clock vetting and negotiations. 
“Each part of this international collaboration was unprecedented,” said Governor Hogan, who also thanked President Moon Jae-in and other South Korean partners, along with 8 Maryland state agencies and the First Lady, who was “truly a champion” of this effort.

“Maryland owes an incredible debt of gratitude to South Korea for putting state on track to achieve goal of widespread testing, which is the most critical part of both Maryland’s recovery plan and the reopening guidelines introduced by the President last week,” said Governor Hogan.

“As Maryland begins its reopening and recovery, Marylanders should feel confident in knowing that we have done everything in our power, gone to every length, and used every tool and every resource at our disposal to defeat this deadly virus,” Governor Hogan added.