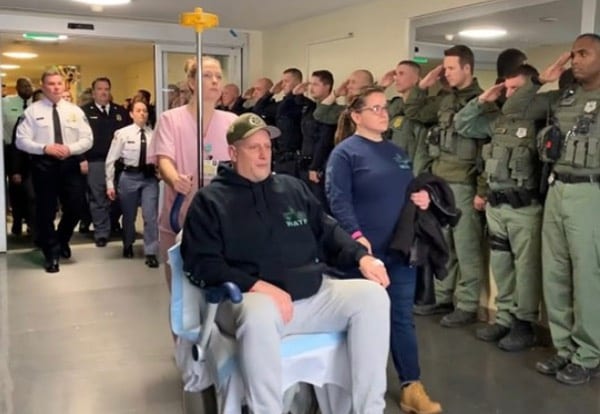 
TOWSON, MD—The Baltimore County Police Officer who was injured in a shooting in northeast Baltimore last week is set to be released from the hospital.

At around noon on Wednesday, members of a joint task force attempted to serve a felony arrest warrant in the 5900-block of Radecke Avenue.

Officers confronted the suspect and shots were fired. Two members of the task force were shot. The suspect was also shot and pronounced dead at the scene.

The officer involved and wounded in the shooting on Radecke Avenue has been identified as Officer First Class Swinney, a 31-year veteran of the department, permanently assigned to the U.S. Marshal’s Capital Area Regional Fugitive Task Force (CARFTF).  Sources told NottinghamMD this week that police believe Officer Swinney may have been hit by friendly fire.

The suspect, 33-year-old Michael Marullo, was a former corrections officer who had “left his job and then had a warrant outstanding for attempted murder in Pennsylvania last night and then came back to Baltimore and was involved in the shooting today,” according to Governor Larry Hogan.

Officer Swinney is expected to be released from Shock Trauma on Tuesday afternoon.