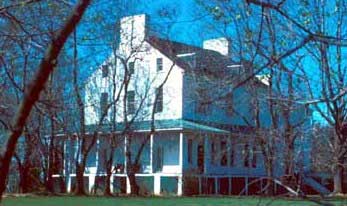 NOTTINGHAM, MD—Halloween seems like the perfect time to take a look at some of the allegedly-haunted locations in and around the Nottingham area.

Are there any?  Is there any truth to the rumors?  We decided to take a closer look.

The historic Perry Hall Mansion may or may not be haunted, depending upon whom you ask.

The Perry Hall Mansion is one of the most historic buildings in Baltimore County. Erected high on a hill above the Gunpowder River Valley, the mansion dominated life in northeastern Baltimore County in the late Eighteenth and early Nineteenth Centuries. It played a critical role in local history and the religious history of the United States.

In the early 1770s, Corbin Lee (a member of the Virginia House of Burgesses and ancestor of Robert E. Lee) decided to build a new home on a 1,000-acre estate he owned in Baltimore County. Lee’s mansion was to be the centerpiece of his plantation, The Adventure. He began building the mansion in 1773, but died in December of that year. Lee’s childless widow sold the estate to Harry Dorsey Gough, a Baltimore merchant who had the good fortune to inherit 70,000 pounds from an English relative at an early age.

Gough named the estate Perry Hall, after a family castle near Birmingham, England. Gough completed the mansion, which became one of the leading homes in colonial society.The Perry Hall estate was so influential that maps from the early 1800s identify modern-day Belair Road as “Perry Hall Road” or “Gough’s Road.”

“The mansion is reportedly haunted by the spirits of days gone by,” writes one explorer on Geocaching.com. “It has been documented that one can hear voices while on the property, cold spots are present, lights turn on and off, shadows are spotted in the windows, and sometimes pictures and video that were taken won’t develop.”

Some of these accounts were reinforced by 2006 book “Weird Maryland,” written by Matt Lake, which related stories of visitors to the mansion seeing strange lights on, even though they were under the impression that the building did not have electricity.

“Several websites have reported that the mansion is haunted. This information is false. There are no recorded deaths at the mansion, and there is no evidence of any hauntings at the property.”


The mansion does, indeed have electric power, and many of the book’s claims just don’t seem to hold up. Built in 1865, this bridge is said to startle some folks who go inside and see the ghosts of slaves hanging from the rafters. Others dispute this, since it was built after the end of slavery and the Civil War. Other witnesses describe the ghost of a woman seen walking on the bridge in old-fashioned garb.

The historic bridge was renovated, rededicated, and reopened in 2016.

It is not known whether any of the occurrences above have been witnessed since the renovation.

This 1700s mansion, now a house museum, is said to be the home of several ghosts, including Priscilla Ridgely of the original owners’ family, whose apparition has been seen throughout the house, and Cygnet Swann, an 1800s resident, the daughter of Governor Swann, who died under mysterious circumstances. Her apparition has been seen and harpsichord playing has been heard coming from her room.

The ghost of a former butler named Tom also has been seen here as well. There are two more ghosts, both unknown, who also appear here. One reportedly likes to roam the house unlocking and unlatching locked doors, and the other makes a noise like beating chains against the walls in the tack room. Some believe this ghost to be original house carpenter Jehu Howell.

Other odd happenings at Hampton House: A spirit allegedly once knocked down all of the display racks when an exhibition was held in the Great Hall; the sound of a crashing chandelier has foretold the deaths of the house’s ladies; and a phantom coach once arrived carrying the house’s master after his death away from home.

What other haunted locations do you know of in northeastern Baltimore County?  Let us know in the comments below.