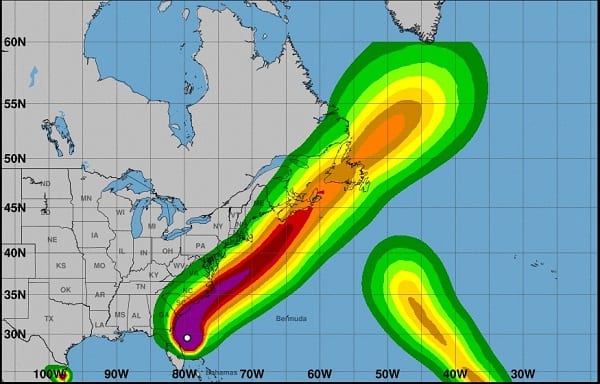 UPDATE: A Tropical Storm Watch has been issued for portions of Maryland.

NOTTINGHAM, MD – Hurricane Dorian, one of the most powerful Atlantic hurricanes in years, may have a serious impact on the Chesapeake Bay.

The storm has already devastated the Bahamas and is now beginning to wreak havoc along the eastern coast of Florida.

On Wednesday, the National Hurricane Center said that life-threatening storm surge and dangerous winds are expected along portions of Florida’s east coast and the coasts of Georgia, South Carolina, and North Carolina, regardless of the track of Dorian’s center.

Water levels could rise well in advance of the arrival of strong winds.  Residents in these areas should heed the advice given by local emergency officials.

The risk of dangerous storm surge, wind, and rain impacts along portions of the Virginia coast and the southern Chesapeake Bay continues to increase, according to NHC officials.  Residents in these areas should continue to monitor the progress of Hurricane Dorian.


Flash flooding will become increasingly likely across coastal Georgia into the eastern Carolinas from Wednesday through Friday.  There is a high risk of flash flooding over coastal sections of the Carolinas, where significant, life-threatening flash flooding is expected.

For more information, visit the National Hurricane Center at http://www.hurricanes.gov.