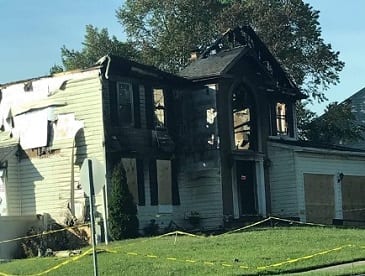 UPDATE: A fundraiser has been planned to help the homeowner – click here for details.

NOTTINGHAM, MD – The community is coming together to support a Nottingham house fire victim.

The fire broke out on Saturday morning in the 8500-block of Hanf Avenue (21236). It took crews from multiple fire companies several house to extinguish the blaze.

The occupant was not home at time, but a family dog was reportedly lost in the fire.

“This was a significant incident that involved personnel from Middle River to Towson,” said Councilman David Marks. “I would like to thank all of the firefighters and other rescue personnel who responded. Their heroism makes us proud every day, but particularly in horrific situations like this one.”