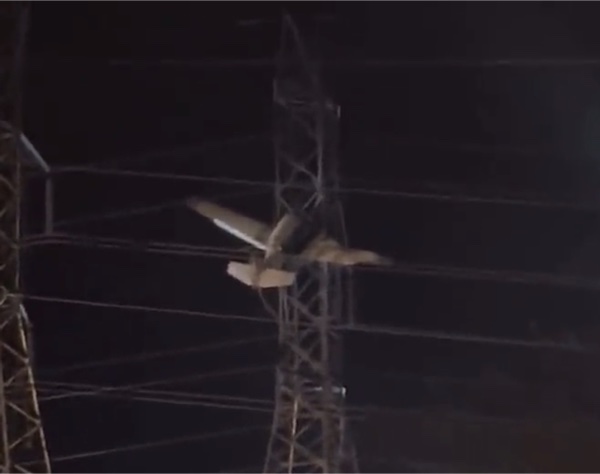 
GAITHERSBURG, MD—The pilot and passenger of a single engine plane that crashed into a power line tower in Montgomery County on Sunday evening have been rescued and transported to an area hospital for medical treatment.

The pilot has been identified as Patrick Merkle, 66, of Washington, D.C. He was operating a Mooney Mike 20P single engine plane. One passenger on board is identified as Janet Williams, 66, of Marrero, Louisiana. Following the rescue operation, both occupants were transported to Suburban Hospital for medical treatment.

At just before 1:00 a.m. on Monday morning, the pilot and passenger were successfully rescued from the suspended plane without incident by EMS personnel using two specialty crane/boom trucks. The area of Goshen Road and Rothbury Drive remains closed while efforts to remove the plane continue.

Shortly before 6:00 p.m. on Sunday evening, Maryland State Police were dispatched to the location of the plane crash about four miles northwest of the Montgomery County Airpark in the area of Goshen Road and Rothbury Drive. Arriving troopers found the plane suspended in the air, entangled in a power line tower.

Investigators from the National Transportation Safety Board and the Federal Aviation Administration are conducting the investigation. Members of the Maryland State Police Criminal Enforcement Division are assisting with the investigation. There are no signs of criminal activity or foul play at this time.