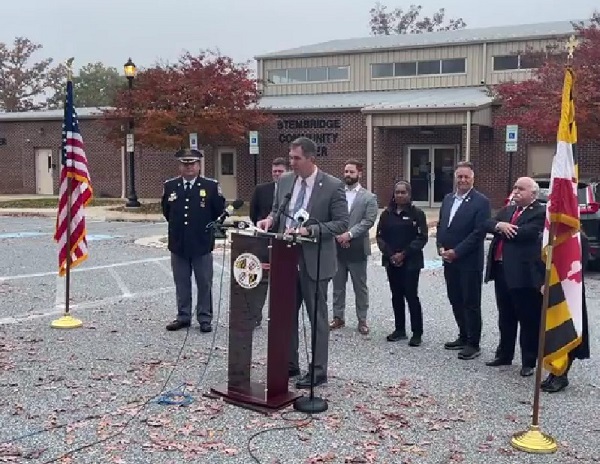 Posted on November 4, 2022 by Chris Montcalmo

The County’s partnership with Roca will be a pilot funded with a combination of state and federal funding. Earlier this year, a state supplemental budget included a $1 million line item for Roca to expand services outside Baltimore City, including this initiative in Baltimore County. Roca’s direct services as well as coaching in violence intervention will initially operate in Essex as part of Baltimore County’s ongoing place-based revitalization initiative in the Essex community.

“Baltimore County’s future is its youth, and reaching high-risk young people with a therapeutic focus and engaging them in meaningful positive can change their paths in life entirely,” said County Executive Olszewski. “I’m grateful that Roca has chosen to partner with us in Essex to address youth violence by breaking cycles and equipping those in need with committed mentors and the skills to access economic and educational opportunities.”

Last year, Olszewski joined with local officials and neighborhood leaders to discuss community concerns, including public safety, code enforcement, access to recreational spaces, as well as other social and economic disparities. Recognizing the need for a coordinated response to address these issues, Olszewski is leading a cross-departmental effort that is dedicating concentrated resources to support the Essex community’s recovery from the COVID-19 pandemic while combatting these historical challenges.

Roca is an internationally recognized organization moving the needle on violence by working with young people at the center of the violence. Roca targets high-risk 16-24-year-olds with an intensive four-year intervention model to address trauma, teach life-saving cognitive-behavioral skills, and break cycles of incarceration and poverty.

Following successful implementation of their model in Baltimore City, Roca was recently awarded $2 million by the U.S. Justice Department to expand their violence intervention efforts, including support for this new expansion into Baltimore County.

“We are grateful to begin this important work with Baltimore County,” said Kurtis Palermo, the Executive Vice President of Roca Maryland. “We understand that Baltimore County has unique challenges with young people who are at the highest-risk of being the victims or perpetrators of gun violence. We have seen the violence crossing back and forth from Baltimore City into Baltimore County and vice versa. This opportunity is critical to stemming the tide of that violence with those young people who we already know and are soon to meet.”

In addition to Roca’s work with referred young people, the partnership may include efforts from Roca’s Impact Institute, through which the organization offers training to police departments to help officers work more effectively with young people who engage in violent behavior, typically as a result of trauma they have experienced in their own lives, such as domestic violence, neglect and abuse, neighborhood violence, and poverty.

“As first responders, our officers are often engaging with the highest-risk youth within our communities,” said Police Chief Melissa Hyatt. “The Baltimore County Police Department is looking forward to collaborating with Roca on this important work.”

Since launching in 2018, Roca Baltimore has worked with 445 young people and enrolled 50 who came through the organization’s after-shooting protocol after being victims of non-fatal shootings.

98 percent of young people served at Roca Baltimore during the past four years had a history of arrests prior to engagement. Of the 84 participants who have been in Roca’s program for more than two years, 79 percent had no new arrests and 98 percent had no new incarcerations for new charges.

Baltimore County’s partnership with Roca is set to begin on Friday, November 4th.