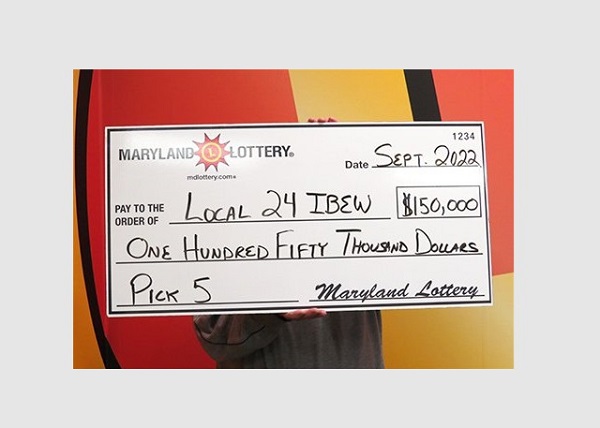 The Baltimore County resident, who nicknamed himself “Local 24 IBEW” for publicity purposes, said he forgot that he had purchased tickets for midday and evening Pick 5 drawings September 20 – 25. He then accidentally purchased another ticket to cover his surgery day and his wife also purchased a ticket for that day. All were $1 straight bets bought at J. Convenience in Carney (2) and 7-Eleven in Towson (1). All three tickets were for the same number: 51359. And on September 22, the retired electrician won a total of $150,000 in the evening drawing.

“The one time that I accidentally buy three tickets, the number hits three times. It was unbelievable,” he said.

“Local 24 IBEW,” which refers to the winner’s Baltimore electrician’s union, said he plays birthday numbers for Pick 5 tickets. His wife’s birthday provided the inspiration for his winning number on Sept. 22.

“Local 24 IBEW” has played Lottery games since the 1970s and enjoyed a winning streak the last few years. The 67-year-old won a big Pick 3 prize a few years ago and a Pick 4 win in the Sept. 2 midday drawing.

“Local 24 IBEW” said he likes going to the ocean for fun and will share some of his prize with his daughters.

The two retailers also benefit from the spouses’ fortunate ticket purchase confusion. Two tickets were purchased at J Convenience at 8765 Satyr Hill Road and one was bought at 7-Eleven at 8507 Loch Raven Boulevard. J Convenience will receive a $1,000 bonus from the Lottery for selling two $50,000-winning tickets and the 7-Eleven will earn a $500 bonus for selling one $50,000-winning ticket.