Police: Megabus driver swerved to avoid striking another vehicle prior to I-95 crash that injured dozens 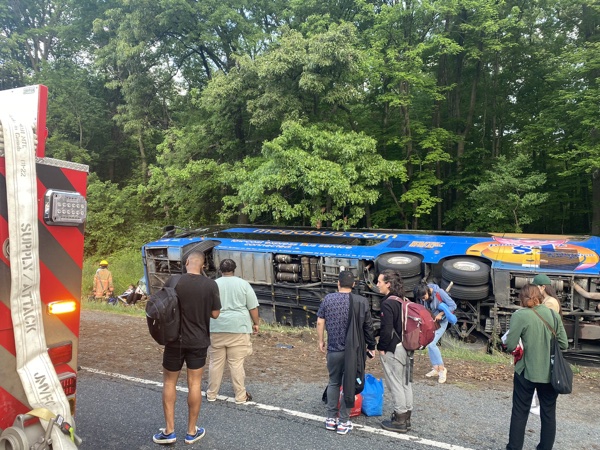 Police: Megabus driver swerved to avoid striking another vehicle prior to I-95 crash that injured dozens


KINGSVILLE, MD—Maryland State Police are continuing to investigate a bus crash in which more than two dozen people were injured on Sunday in Baltimore County.

At just before 7 a.m. on Sunday morning, troopers from the Maryland State Police JFK Memorial Highway Barrack responded to southbound Interstate 95 near Kingsville for a report of a bus that overturned.

According to a preliminary report, the bus was in the right lane of the highway when the driver swerved to avoid striking another vehicle. The driver lost control of the bus, leading to it going off the road and overturning.

The bus, which was carrying 47 people, rolled over near Bradshaw Road and Raphel Road. Twenty-seven people reported injuries at the scene. Twelve of those victims refused transport and 15 were taken to local hospitals for treatment of their injuries.

Baltimore County and Harford County fire and EMS crews responded to the scene to care for the patients. No fatalities were reported. Neither impaired or distracted driving were factors in the crash. No charges have been filed in this case.