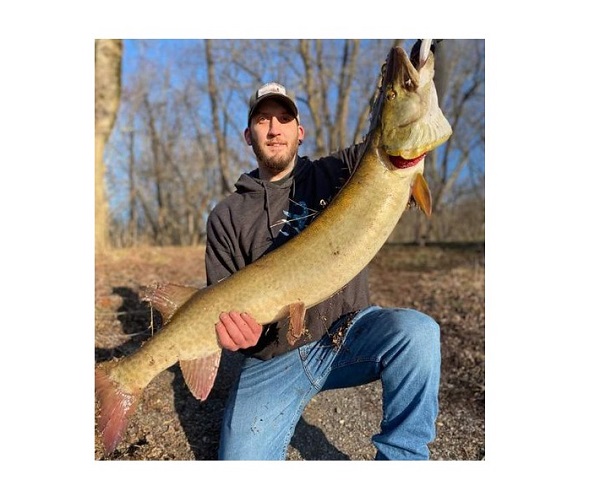 
ANNAPOLIS, MD—The Maryland Department of Natural Resources confirmed that a Washington County man has set a new nontidal state record for muskellunge. Kyle Mullenix of Hagerstown caught the 33-pound, 49-inch long record muskie on March 2 along the banks of the upper Potomac River.

Regarded as the “fish of ten thousand casts,” muskies are the largest freshwater fish in Maryland and among the most difficult to catch.

Mullenix is credited with the first Maryland state fishing record of 2022. The 32-year-old lifelong angler said he has spent decades trying to catch a muskie. Using a 7-foot spinning rod and live bait, his luck finally changed.

“He put up a good fight, but we didn’t think it was that big until it was on the bank,” Mullenix said. “Things don’t always go as planned, but now life has gotten a lot better.”

The catch was weighed on a certified scale by George Rowe of Ernst Country Market in Clear Spring and verified as a muskellunge – Esox masquinongy – by a DNR biologist.

To help determine the age of the fish, a sample of the muskie’s scales and cleithrum – a large bone above the gills – was requested by biologists from the taxidermists for further analysis.

Anglers reporting a potential record catch should call 443-569-1381 or 410-260-8325. The fish should be immersed in ice water to preserve its weight until it can be checked, confirmed and certified by the department.