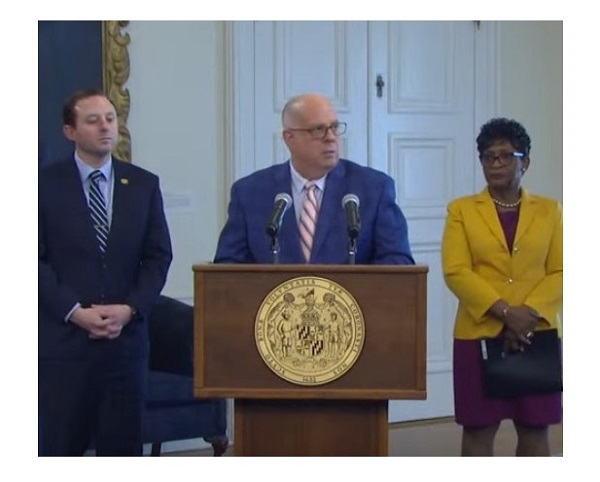 
ANNAPOLIS, MD—Governor Larry Hogan on Friday signed emergency bipartisan legislation to immediately suspend the state of Maryland’s gas tax for 30 days. With this action, which both the House and Senate passed with unanimous support, Maryland became the first state in the nation to enact an immediate suspension of the gas tax.

“This bipartisan action will provide some relief from the pain at the pump and it is possible because of the prudent fiscal steps we have taken, which have resulted in a record budget surplus,” said Governor Hogan. “This is, of course, not a cure-all, and market instability will continue to lead to fluctuations in prices, but we will continue to use every tool at our disposal to provide relief for Marylanders.”

The governor was joined by Senate President Bill Ferguson and House Speaker Adrienne A. Jones, along with lawmakers from both the House and Senate.

Prior to the legislative session, the governor announced the largest tax cut package in state history to provide long-term relief for working families, retirees, and small businesses. This builds on the RELIEF Act of 2021, which delivered $1.45 billion in tax relief and economic stimulus for families and small businesses struggling as a result of the COVID-19 pandemic.

“We are also engaged in productive discussion to advance long-term tax relief for Maryland families, small businesses, and retirees, which is supported by an overwhelming majority of Marylanders,” continued the governor. “With our state in a stronger fiscal position than ever before, we simply can’t afford not to let more Marylanders keep more of their own hard-earned tax dollars in their own pockets, particularly our seniors on fixed incomes.”

In addition to today’s actions, the governor has expressed support for legislation pending in the General Assembly that would suspend automatic increases in the gas tax, and he has called on the federal administration to increase domestic energy production.