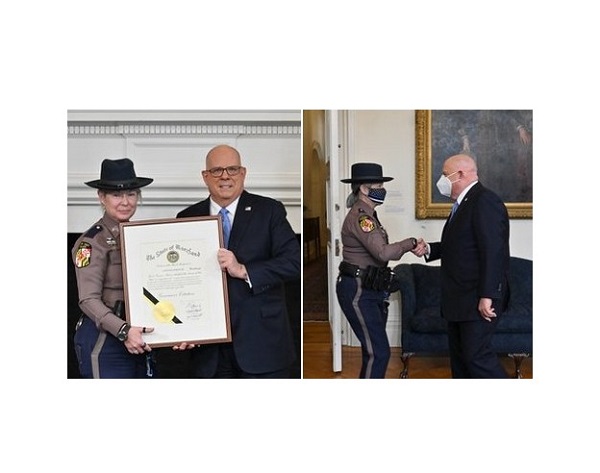 Posted on February 8, 2022 by Chris Montcalmo

Last week, Cpl. Annette Goodyear, a police officer with the North East Police Department who also serves as a crossing guard, was struck and treated at a local hospital after a vehicle failed to stop as a student was crossing the street.

Goodyear pushed the student forward just before the vehicle, a black sedan, hit her (Goodyear).  The vehicle did stop and the child went to Goodyear’s side as onlookers came over to help.

Goodyear was taken to a hospital as a precaution and quickly released, according to NBC Washington.

“Like so many Marylanders, I was moved by the video of Cpl. Annette Goodyear selflessly putting herself in harm’s way to save a young student from being hit by an oncoming car last week,” said Governor Hogan on Tuesday.  “Today I presented her with a governor’s citation for her incredible act of heroism.”

Video from last week’s incident can be viewed here.