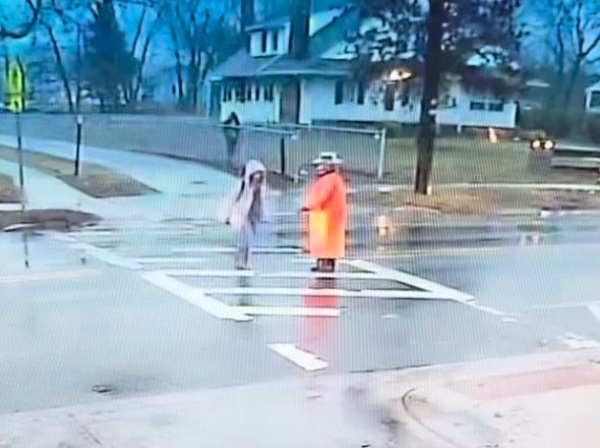 NORTH EAST, MD—A Maryland crossing guard will receive a governor’s citation after saving  a student from being struck by an oncoming vehicle last week.

On Friday, crossing guard Annette Goodyear, who is also a police officer, was struck and treated at a local hospital after a vehicle failed to stop in time as a student was crossing the street.

The video below shows Goodyear pushing the student forward just before the vehicle, a black sedan, hits her (Goodyear).  The vehicle did stop and the child went to Goodyear’s side as onlookers came over to help.

Goodyear was wearing an orange poncho at time of the accident.

“Gratitude and prayers to Corporal Annette Goodyear from the North East Police Department for her heroism,” said Cecil County Executive Danielle Hornberger. “The town of North East is already working on commendations for her bravery and swift action.”

Goodyear was taken to a hospital as a precaution and quickly released, according to NBC Washington.

“I will be awarding a governor’s citation to Annette Goodyear for her incredible heroism in putting herself at risk to save a young student from being hit by an oncoming car,” said Governor Larry Hogan on Monday.

There is no word on whether the driver will be facing any charges.

Video of the frightening incident can be viewed below.