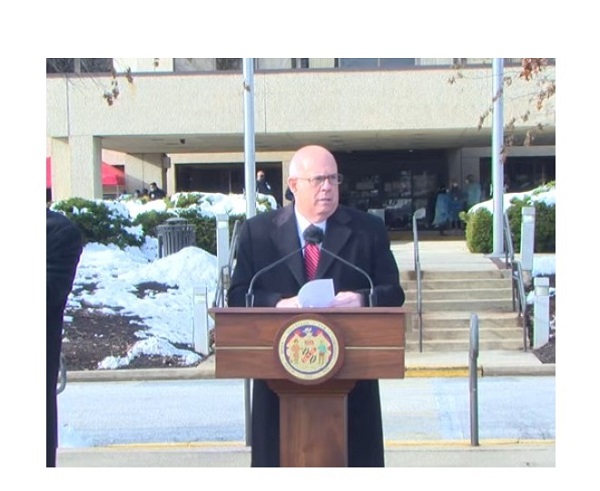 Posted on January 6, 2022 by Chris Montcalmo


ANNAPOLIS, MD—Governor Larry Hogan on Thursday toured the location of a new, state-run COVID-19 testing site at UM Laurel Medical Center and announced the locations for nine additional hospital-based testing sites that will open by the end of next week.

The new sites will help to meet rising demand for testing and divert people away from visiting hospital emergency rooms solely to get COVID-19 tests.

“One of the primary goals of these locations is to ease the burden on the hospitals and emergency rooms,” said Governor Hogan. “We are already getting reports that their emergency room traffic for testing has dropped dramatically as a result.”

Governor Hogan announced a total of 10 locations for hospital-based testing sites, which are on track to be fully operational and open daily for walk-ups, with no appointment necessary, by the end of next week. They include:

This is in addition to hospital-based testing sites that opened last week at University of Maryland Upper Chesapeake Health in Bel Air and at Anne Arundel Medical Center in Annapolis.

Governor Hogan also announced that, in partnership with the state, the federal government will provide support for a surge testing site at St. Agnes Hospital in Baltimore.

After notifying the Board of Public Works that the state would be pursuing emergency procurements to acquire more at-home rapid tests to address the national shortage, Governor Hogan on Thursday announced that Maryland is on track to receive another 500,000 rapid tests within the next week. This is in addition to the 1 million rapid tests that the state previously announced.