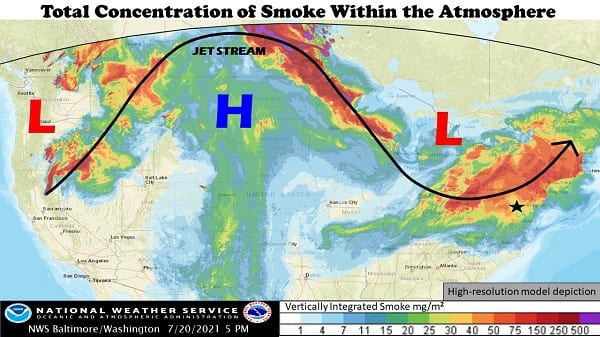 The National Weather Service says this is due to smoke from the U.S. wildfires, which is getting transported across the country via the jet stream.

The massive Bootleg Fire in Oregon has scorched an area larger than Los Angeles, and is so large and is burning so hot that it’s creating its own weather, according to CNN.

While most of the smoke is higher in the sky, some of it is making its way closer to the ground.

The smoke is contributing to a Code Orange Air Quality Alert that is in effect for Maryland on Wednesday.

Smoke particles can prove dangerous to young children and to those who have preexisting cardiopulmonary illnesses such as asthma and heart disease.

Wildfires have devoured more than 1.2 million acres of drought-stricken land so far this season.

Meteorologists say wildfires are most frequently started by people or lightning and are a natural part of the ecological cycle.

Forecasters say the smoke should begin to clear out on Wednesday evening as a cold front moves through the region.

As forecast, with smoke from Canadian wildfires leading to hazy skies and elevated fine particulates we are seeing Code Orange air quality in much of Maryland. https://t.co/Q3f0i517uz

Photo via the National Weather Service