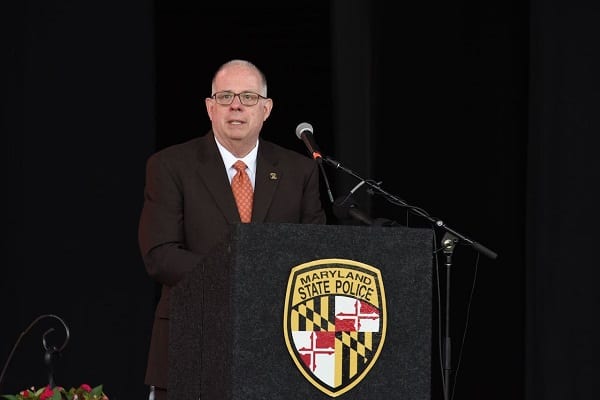 COLUMBIA, MD—As Governor Larry Hogan and other state officials and proud family members looked on, trooper candidates raised their right hands on Friday and took an oath to serve and protect the people of Maryland as they officially became state troopers during the graduation ceremony for the Maryland State Police 152ND Trooper Candidate Class.

The Maryland State Police Academy graduation was held on Friday morning at Merriweather Post Pavilion. More than 1,000 family members and friends of the graduates attended. In addition, hundreds more current and former Maryland State Police employees attended as part of the year-long commemoration of the 100th anniversary of the founding of the Department.

The 46 members of Trooper Candidate Class 152 completed 27 weeks of a residential police training academy, known as one of most intense and comprehensive state police training programs in the country. During six months of strict discipline and a demanding schedule, the trooper candidates received instruction in criminal and traffic laws, emergency care, emergency driving, physical training, and scenario-based training that included de-escalation and conflict resolution.

“This class has the distinction of beginning almost exactly 100 years after the very first MSP academy class, and now, after you take the oath here today, Class 152 will be charged with leading this agency into its next century of service—a task for which I know that you are both well-equipped and well prepared for,” said Governor Hogan. “Congratulations on your accomplishment, and on behalf of all the people of an incredibly proud and grateful state, we wish each of you success, safety, and godspeed.”

“Class 152, I am grateful to you for choosing a career in law enforcement with the Maryland State Police,” Colonel Woodrow W. Jones III, Maryland State Police Superintendent, said. “You will be expected to uphold and exceed the standards set by those who came before you. As you accept the incredible responsibilities and authority entrusted to you by the citizens of Maryland, I urge you never to forget that your mission is to serve and protect. You are now a public safety servant who is expected to courageously perform your duties, while upholding our core values of integrity, fairness and service.”


Among the members of the class, six have prior military experience, four previously worked in law enforcement or corrections and 11 were Maryland State Police cadets. Twenty-two of the trooper candidates already had college degrees and another 20 enrolled in the concurrent Associate of Arts program with Frederick Community College. They received their degrees this week, prior to the Academy graduation.

Following a brief period of leave, the new troopers will report to barracks across Maryland to begin eight weeks of practical instruction with field training troopers. Upon successful completion of that training, they will be permitted to patrol alone.

Video from Friday’s event can be viewed below.