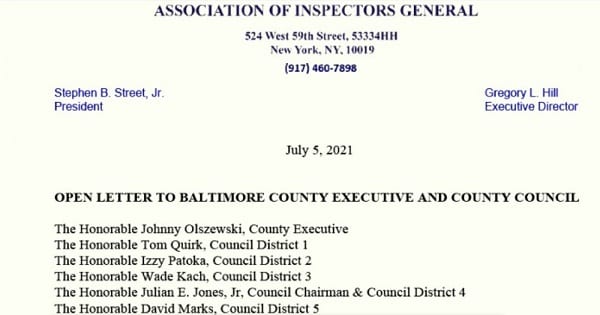 
UPDATE: Baltimore County officials have announced that the administration will be postponing plans to introduce legislation to create an oversight board for the Office of the Inspector General.

“The proposed bill in its present form, should it become law, will deprive the Inspector General of the ability to fulfill its mission,” wrote Stephen B. Street, Jr., president of the nation’s leading corruption watchdog association.

“The end result,” he warned, “would be the mere appearance of oversight, which is much worse than no oversight at all.”

The 2,000-member organization, which represents federal, state, and local inspectors general across the U.S., was reacting to a bill that would place Baltimore County IG Kelly Madigan under the control of a board of political appointees, who would have the right to disapprove, modify, and curtail the scope of her investigations into waste, fraud and corruption in county government.

“The proposed legislation effectively kills the Office of the Inspector General in Baltimore County,” said Baltimore County School Board Member Julie Henn. “Even worse, it creates the guise of oversight, when truly, there will be none. If passed, it will be a sad day for Baltimore County.”

The full text of the letter can be viewed below:

The AIG was recently provided a copy of a proposed bill related to the Baltimore County Office of Inspector General and was asked to respond to its content. As the bill has not yet been formally introduced, we will qualify our comments as being based solely upon the copy that was provided. Transparency, accountability and integrity are essential principles and vital to any government’s credibility with its citizenry.

Having reviewed the proposed (unintroduced) bill, the Association of Inspectors General has grave concerns regarding its language and structure. We strongly recommend that the proposed bill be re-evaluated and that Baltimore County government proceed with careful deliberation and caution on any such proposed legislation.

We would like to point out three preliminary issues that stand out and are contrary to the well-established Principles and Standards for Offices of Inspector General that have been in place for more than two decades:

The AIG knows from long experience that these issues are not unique to Baltimore County, but have manifested in various forms throughout the country wherever Inspectors General exist. Like those in any democratic society, the citizens of Baltimore County deserve and expect that their government will serve their best interest, and also be transparent and accountable to the public.

The proposed bill in its present form, should it become law, will deprive the Inspector General of the ability to fulfill its mission and the independence that it must have in order to be effective. The end result would be the mere appearance of oversight, which is much worse than no oversight at all.

The AIG possesses the experience and expertise in navigating these complex issues and, as a non-partisan and not-for-profit organization, stands ready to assist or provide a more detailed analysis.

With Best Regards, I am respectfully,
Stephen B. Street, Jr.
President, Association of Inspectors General