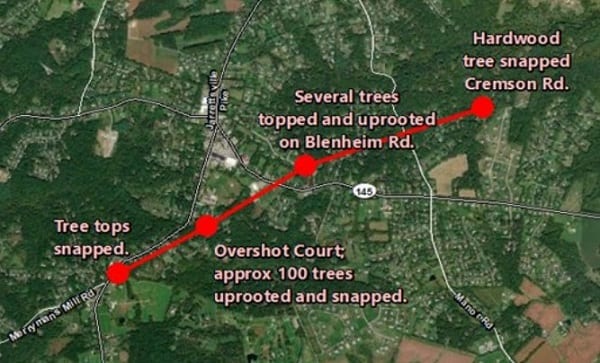 JACKSONVILLE, MD—The National Weather Service has confirmed that a tornado touched down in Baltimore County on Thursday.

The EF-1 twister touched down in Jacksonville at just before 5 p.m. EDT, packed 95 mph winds, and caused damage across a 2-mile stretch of the county.

The tornado was about 120 wide and initially touched down just north of the intersection of Merrymans Mill Road and Jarrettsville Pike, where minor tree damage and snapped tree tops were observed.

The tornado continued moving northeast producing more significant tree damage as it moved east of Jarrettsville Pike toward the southern end of Overshot Court. The most extensive tree damage was noted along Overshot Court where multiple hardwood and softwood trees were uprooted and snapped. About 100 trees were damaged on Overshot Court.  A home on Overshot Court had siding damage, lost a portion of its eave on the northeast side of the house, had a shutter blown off, and a flagpole blown down. Siding from this house was found 120 yards to the northwest of the house.

Eyewitness accounts were taken from several residents along overshot court and all related to a similar story of relatively quiet conditions followed by a loud and incessant roaring sound, with reduced visibility due to heavy rain and swirling winds. One resident texted that they entered their basement when they heard the loud roar, with the timestamp of that text being 4:57 p.m. EDT. All residents noted the damage occurred quickly lasting well less than one minute.


As the tornado moved northeast, it crossed wooded areas south of the Carroll Manor Recreation Council building on route 145, where limited tree damage was noted. No damage was noted along Fox Run Court, but as it crossed the 14000-block of Blenheim Road, several trees were damaged along with several uprooted and several topped. One large, 2-foot diameter tree was uprooted and facing west, while a trampoline from a residence was blown over 200 yards to the east, and several softwood pine trees were snapped. The large, uprooted tree damaged a section of a covered porch.

Additional data is available from the National Weather Service online here and via the graphic below.