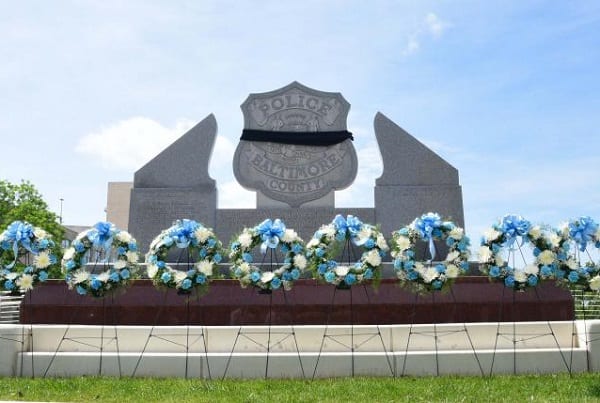 TOWSON, MD—A memorial service to honor Baltimore County police officers who died while performing their duties will take place on Friday, May 14, at 10 a.m.

The service will take place at Patriot Plaza, 401 Bosley Avenue in Towson (21204). The service will be moved inside the County Council Chambers in the Old Courthouse, 400 Washington Avenue, 21204 if there is inclement weather.

County Executive Johnny Olszewski, Council Chairman Julian E. Jones, Jr., Baltimore County Police Chief Melissa R. Hyatt, a few police dignitaries, and family members of local fallen heroes will be at the service. Attendance will be limited, however the department will livestream the ceremony beginning at 10 a.m. The service can be watched via the embedded player below.

Ten wreaths will be placed at the memorial by the Baltimore County Police Department Honor Guard. The ten wreaths are in memory of the ten fallen officers.

OFFICER AMY SORRELLS CAPRIO
On May 21, 2018, Officer Amy Sorrells Caprio, 29, responded to a call for a suspicious vehicle with multiple suspicious subjects walking around homes on Linwen Way in Precinct 8/Parkville. When she arrived and located the vehicle, she got out of her police car and ordered the driver to exit the vehicle. Instead, the driver accelerated and fatally struck Officer Caprio. She was nearly a four-year veteran of the Department and was married. Officer Caprio is the first female line-of-duty death in the Department’s history.

LIEUTENANT MICHAEL HOWE
Lieutenant Michael Howe died on August 11, 2008 following a massive stroke. On August 10, 2008, Lieutenant Howe was with his unit at the scene of a murder-suicide in Precinct 4/Pikesville. When Lieutenant Howe returned home after the incident, he collapsed. He was taken to Johns Hopkins Hospital where he died the next afternoon.

SERGEANT MARK PARRY
Sergeant Mark Parry died on January 21, 2002 from injuries sustained in a traffic crash. On December 27, 2001, while on routine patrol in Towson, Sergeant Parry’s unmarked police car was hit by a drunk driver. The driver fled the scene and was arrested a short distance later.

OFFICER JOHN STEM
Officer John Stem died on October 19, 2000 of complications of paraplegia caused by a line-of-duty gunshot wound he suffered in July 1977. Officer Charles Huckeba was fatally wounded during the same incident in Precinct 1/Wilkens. Officers Stem and Huckeba and other officers were trying to subdue an agitated, armed, 19-year-old man who barricaded himself in his family’s home.


SERGEANT BRUCE PROTHERO
On February 7, 2000, Sergeant Bruce Prothero was shot and killed during an armed robbery on Reisterstown Road. Four men robbed the jewelry store where the married father of five worked part time as a security guard. Sergeant Prothero followed the armed robbers out of the store and was shot by one of the men. He died an hour later at a local hospital.

OFFICER ROBERT ZIMMERMAN
On November 5, 1986, Officer Robert Zimmerman was on foot patrol on Edmondson Avenue in Precinct 1/Wilkens when he was struck in traffic and critically injured. The 41-year-old officer died on November 14, 1986 as a result of his injuries.

CORPORAL SAMUEL SNYDER
In August of 1983, Corporal Samuel Snyder, a 30-year veteran of the department, was shot by a mentally ill subject while responding to a call for assistance from fellow officers in Towson. Officer Snyder died on August 23, 1983 from his wounds.

OFFICER CHARLES HUCKEBA
Officer Charles Huckeba was shot and killed on July 6, 1977 in Precinct 1/Wilkens as police attempted to talk an armed, drug-abusing, barricaded youth into surrendering. Officer John Stem was also injured during this incident. Officer Stem succumbed to his injuries 23 years later on October 19, 2000.

OFFICER EDWARD KUZNAR
On December 9, 1969, Officer Edward Kuznar died as a result of a traffic accident. While on traffic patrol near Kingsville, Kuznar was hit head-on by a driver who crossed the center line and crashed into his police car. Both the officer and the driver were killed.

Family Fest at 43 returns this Saturday