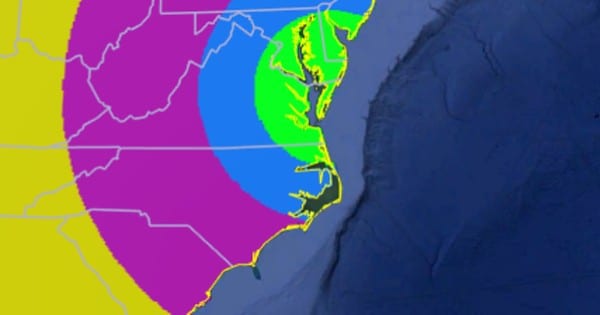 UPDATE: The launch has been postponed due to weather. Another attempt will be made on Sunday night.

The mission is scheduled for no earlier than 8:02 p.m. EDT with a 40-minute launch window on Saturday, May 8. Backup launch days run through May 16, according to NASA.

The launch may be visible, weather permitting, in much of the eastern United States from the Atlantic coast to the Mississippi River.

A four-stage Black Brant XII rocket will be used for the mission that includes the release of barium vapor that will form two green-violet clouds that may be visible for about 30 seconds. The barium vapor is not harmful to the environment or public health

The mission, called the KiNETic-scale energy and momentum transport eXperiment, or KiNet-X, is designed to study a very fundamental problem in space plasmas.

The vapor will be released approximately 9 minutes and 30 seconds to around 10 minutes after launch at about 217-249 miles altitude over the Atlantic Ocean and 540-560 miles downrange from Wallops and just north of Bermuda.

Immediately after release of the vapor, the spherical clouds are a mixture of green and violet, but that phase only lasts about 30 seconds when the un-ionized component of the cloud has diffused away. After exposure to sunlight the vapor clouds quickly ionize and take on a violet color.


Live coverage of the mission will be available on the Wallops IBM video site, beginning at 7:40 p.m. EDT. Launch status updates can be found on the Wallops Facebook and Twitter pages.

The visibility map for Saturday night’s rocket launch can be viewed below.