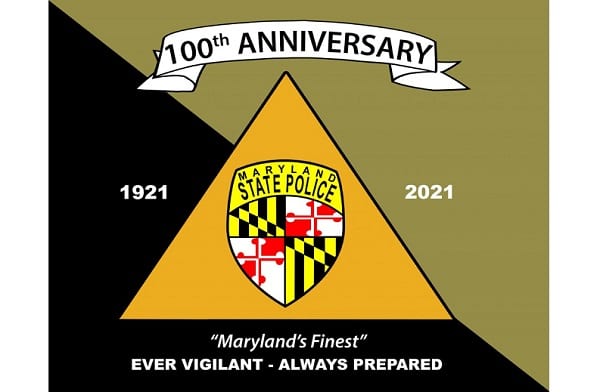 Officials say the idea was born of necessity. The dawn of the 1920’s brought a perplexing problem to the office of Maryland Governor Albert Ritchie. The advent of the automobile was providing criminals with the means to expand their criminal enterprises and the ability to quickly flee their crime scenes and travel out of the area to avoid detection and arrest.

Governor Ritchie proposed a solution that changed the landscape of law enforcement in Maryland. He decided a police force was needed that had statewide jurisdiction and would provide both criminal and traffic enforcement across the entire state of Maryland.

“Every hour of every day for the past 100 years, the men and women of the Maryland State Police have served the people of Maryland with a dedication to duty and a commitment to service that is second to none,” Maryland State Police Superintendent Colonel Woodrow W. Jones III, said. “The stories of their selfless service, their courage and their sacrifice would fill volumes. Through the years, thousands of sworn employees who have worn this uniform and thousands who have served in civilian support have built a legacy of excellence in public safety services. The Maryland State Police family is proud of these past 100 years of service to the people of our state. We look forward to the history we will write in the years ahead as we continue to uphold the reputation and tradition of ‘Maryland’s finest.’”

With an authorized strength of just under 2,400 employees, the Maryland State Police continues its mission of purposed policing in every corner of the state, in coordination with and support of local law enforcement agencies in each county. Patrol troopers are assigned to 23 barracks and patrol in every county. State Police criminal investigators work in every jurisdiction, focusing on cross-border and inter-jurisdictional criminal activity.

Providing quality public safety services has not occurred without a cost. During the past 100 years, 43 Maryland state troopers and one deputy state fire marshal lost their lives in the line of duty.

In 1935, the Maryland State Police was separated from the Commissioner of Motor Vehicles and was established as its own department of state government. During the 1930’s, women were hired to replace men as civilian stenographers, clerks, and radio & teletype operators.

In 1950, Maryland State Police Headquarters moved from its location at the Pikesville Armory to a refurbished military garrison originally built in 1816. The new headquarters location in Pikesville housed the State Police Training Academy, where trooper candidates lived for their six-months of training.

On July 8, 1957, Milton Taylor became the first African American Maryland state trooper. He led the way for a proud history of African American troopers. He held the rank of captain upon his retirement in 1982.

The 1960’s saw the development of specialized units within the Department. The Aviation Unit was formed in 1960, followed by the K-9 Unit and what is now known as the Underwater Recovery Team in 1961. The Automotive Safety Enforcement Division was formed in 1965 and is still responsible for overseeing compliance at Maryland vehicle inspection stations. That same year, the first tactical team was organized and trained. Maryland State Police tactical teams would respond to multiple disturbances on college campuses, in Maryland cities and in state prisons during that decade and the next.

What is now known as the Commercial Vehicle Enforcement Division was organized in 1967 and the State Police Cadet Program was begun. Troopers, truck inspectors and cadets continue to help keep Maryland highways safe through strict enforcement of commercial vehicle safety laws.

In March 1970, the Maryland State Police Aviation Command began a new mission that would change the face of medical services in our state forever. A State Police pilot and medic were dispatched in a Bell Jet helicopter to the scene of a traffic crash on the Baltimore Beltway. They picked up the critically injured patient and flew him to the University of Maryland Shock Trauma Center, where Dr. R Adams Cowley was pioneering trauma care and the concept of the ‘Golden Hour.’ Since then, more than 150,000 people have been flown to lifesaving care by our helicopter crews.


During the decade of the 70’s, the Crime Laboratory Division was established and quickly became a vital part of Maryland State Police investigations. The Special Traffic Enforcement Unit was formed and the work of troopers across Maryland helped establish a national reputation for excellence in speed, impaired driving and related traffic enforcement initiatives. The Special Tactical Assault Team Element and Crisis Negotiation Team were formed and became integral to Maryland State Police responses to barricade or other high-risk incidents.

The 1980’s saw continued growth in the State Police. New barracks and a new crime lab were built to replace aging facilities. Motorcycles were again part of the patrol fleet and the Aviation Command began transitioning to new helicopters. Operation Spider and other traffic enforcement efforts were launched. By the end of the decade, impaired driving arrests had nearly tripled from the decade before.

In 1994, state law established Maryland’s DNA database and assigned its coordination to our Forensic Sciences Division. That Division still coordinates the database which has been used to identify suspects and connect cases thousands of times over.

The Maryland State Police Computer Crimes Unit was established during the 1990’s and was the first among Maryland law enforcement agencies. Today, that unit continues to be a vital part of both criminal and traffic investigative work due to the ever expanding use of electronic devices and technology.

In 2006, the newest Forensic Sciences Division facility was opened. This is the largest crime laboratory facility in Maryland and houses scientists who perform a wide range of forensic services. Seventy-percent of the cases analyzed in the Maryland State Police crime laboratory are in support of local law enforcement agencies that do not have these capabilities.

In 2007, members of the Maryland State Police Information Technology Division developed and launched the Electronic Traffic Information Exchange, which dramatically improved the process for issuing citations and warnings. This system is now used by most Maryland law enforcement agencies.

The Regional Automated Property Information Database, known as RAPID, was developed in an effort to track stolen property. This database is widely used by law enforcement and has significantly improved the ability of police officers to close property crime cases with arrests.

This past decade has seen the launch of the State Police Impaired Driving Reduction Effort, a full-time team targeting impaired drivers. The Maryland State Police continues to be a leader in impaired driving enforcement. The State Police Mobile Field Force program was implemented that can assemble and deploy hundreds of specially-trained and equipped troopers to the scene of a disturbance within hours.

The State Police Aviation Command implemented the conversion to a new helicopter fleet and doubling the size of the crew on each aircraft. Today, these state-of-the-art aircraft and the crews who staff them continue to save lives in our skies every day.

“While much has changed in 100 years, the two things that have remained constant are our mission and our commitment,” Colonel Woodrow W. Jones III, said. “We continue to have a statewide mission to serve and protect the citizens of Maryland. The shield we proudly wear continues to represent help and hope to people who are in danger or in need of care. The dedication to duty of the men and women who wear this uniform and serve in civilian support has not changed. The members of the Maryland State Police family are individuals committed to our core values of integrity, fairness and service. They are willing to set themselves apart from the rest, with a deep and relentless commitment to be the best. We are proud to serve the people of Maryland.”

Man robbed at gunpoint in Carney

Pedestrian dies after being struck on Loch Raven Boulevard