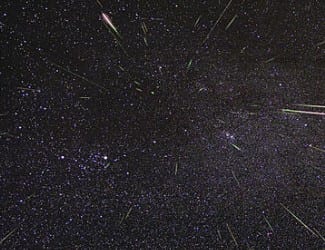 NOTTINGHAM, MD—The annual Leonid Meteor Shower peaks on Monday night, but shooting stars will likely be visible throughout the week across Baltimore County.

The most meteors are expected to be visible on Monday night and into the dawn hours on Tuesday.  At the shower’s peak, stargazers may see as many as 10 to 15 meteors per hour.

The Leonids are known for producing some of the most amazing meteor displays in the annals of astronomy. Most notable are meteor storms in 1799, 1833 and 1966, when meteor rates of tens of thousands per hour were observed, according to Space.com. More recently, in 1999, 2001 and 2002, lesser Leonid displays of “only” a few thousand meteors per hour took place.

The November sky show is called the Leonids due to the fact that the shower’s emanation point — the spot from which the meteors seem to fan out — is located within the constellation of Leo, the Lion, from within the backward question mark pattern of stars known as “The Sickle.”

The meteors are caused by Comet Tempel-Tuttle, which sweeps through the inner solar system every 33.3 years. Its last perihelion (closest point to the sun) was February 28, 1998. Its next expected perihelion is May 20, 2031, according to EarthSky.org.

So how can you enjoy the Leonids in Baltimore County? Find a dark sky away from pesky artificial lights, grab your favorite outdoor reclining lawn chair or sleeping bag, and watch for the meteors. The new moon on November 15 guarantees a dark sky.


More info on the 2020 Leonid Meteor Shower can be found below.