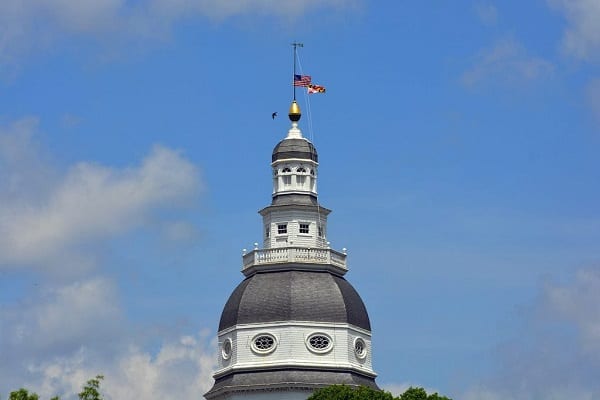 Posted on September 19, 2020 by Chris Montcalmo

NOTTINGHAM, MD—The United States and Maryland flags have been lowered to half-staff to honor the life and legacy of Supreme Court Justice Ruth Bader Ginsburg, who died on Friday evening at 87 years of age following a lengthy battle with cancer.

Gunsburg was nominated by President Bill Clinton and was generally viewed as belonging to the liberal wing of the Court. She was the second woman to serve on the Supreme Court, after Sandra Day O’Connor.

“Supreme Court Justice Ruth Bader Ginsburg was a revered jurist, a trailblazer for women’s rights, and a fierce advocate for justice,” said Governor Larry Hogan. “Throughout her 27 years of service on our nation’s highest court, and multiple battles with cancer, she displayed undaunted courage and resolve.”


“On behalf of a grateful state and nation, the First Lady and I send our heartfelt condolences to Justice Ginsburg’s family and loved ones during this difficult time,” Hogan added. “She will be deeply missed.”

“Ruth Bader Ginsburg was a trailblazer, a champion for women’s rights, and a guardian of justice,” said Baltimore County Executive Johnny Olszewski. “For decades, she fought for women and the vulnerable, building a monumental legacy. Her opinions made history, and her work made our nation more just.”

“Together, we must resolve to continue her fight for equality and justice. Rest In Power,” Olszewski added.

Statement from the President on the Passing of Supreme Court Associate Justice Ruth Bader Ginsburg pic.twitter.com/N2YkGVWLoF