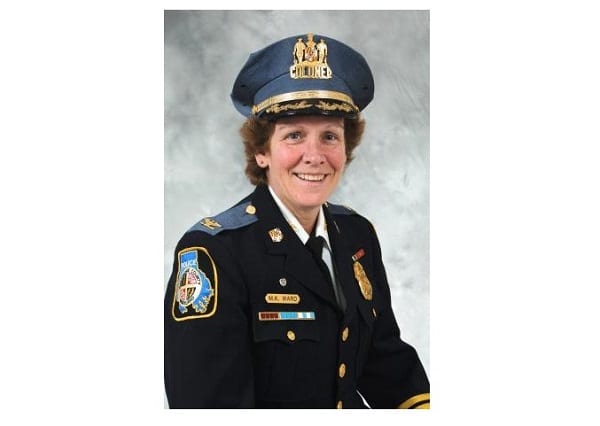 Colonel Ward was a pioneering woman in the field of policing, leading the way for a generation of officers who continue to walk in her footsteps.

She began her career with the Baltimore County Police Department in 1981. When she retired after 33 years of service in 2015, Colonel Ward was the highest ranking female officer in the history of the department, and remains so only to the exception of the appointment of Chief Melissa Hyatt in 2019.

With a deep concern for child victims of crime and the holder of both a Bachelor of Science and Master’s Degree in Education, in her rank as Corporal and Sergeant at the police training academy, Colonel Ward was instrumental in introducing adult learning theories to police training, and in developing curriculum to teach officers strategies for investigating child abuse cases to ensure successful prosecution while reducing trauma and further victimization to the child.

Colonel Ward was an advocate for minority officers and the unique issues they faced, and was selected by then Chief Behan to serve as a liaison officer for female officers, a position that grew into what is now referred to as the department’s Fair Practices Liaison.

She was also an advocate for advancing positive relationships between the community and police, with special concerns for citizens suffering from a crisis or mental health conditions. She directed the development of continuing education for officers regarding interactions with people experiencing a mental health crisis and brought BCoPD to the forefront of educating its officers in this discipline, which still exists in the curriculum today. She was also instrumental in the creation of the department’s Mobile Crisis Team, just a pilot program back in 2008, but the first in our area to team an officer in the field with a mental health case worker to respond to calls.


Colonel Ward was innovative in leading a program, now called our JOINS program, which partnered officers with case workers from the Department of Juvenile Services to help prevent juvenile crime through the development of intervention programs and divert minor offenders to other resources. In the same effort, Colonel Ward helped to develop our Youth Leadership Academy, aimed at improving character, self-esteem and good citizenship in teens. Under her leadership the Department also developed the Citizens Academy, open to all County residents seeking to build education and understanding between the police and citizens we serve.

Colonel Ward was a friend and mentor to many, leading by example with tenacity and compassion. She continued her service after retirement by remaining active in community groups, and will be missed by many, department members and citizens alike. The legacy she leaves, however, will continue to live through those whose lives she touched within this Department and the community she served.

Services were held privately on Tuesday, however donations to the following organizations are encouraged…