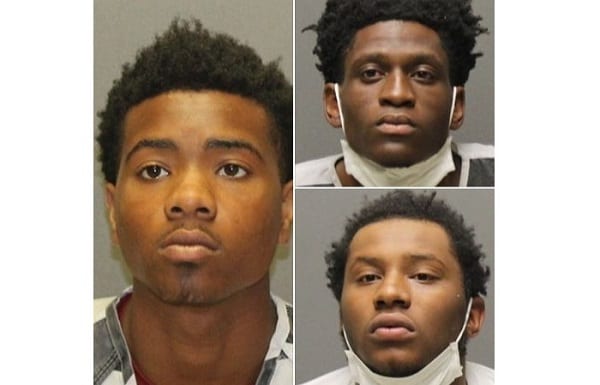 EDGEWOOD, MD—Three men were charged after an armed robbery at an Edgewood hotel on Friday afternoon.

At just before 2 p.m. on Friday, police responded to the Red Roof Inn, located in the 2100 block of Emmorton Park Road, for a report of an armed robbery.

Upon arrival, deputies with the Harford County Sheriff’s Office found five adult victims and one juvenile victim.  The victims told authorities that they had been robbed at gunpoint in one of the hotel rooms. While the victims were in one of the rooms, three male suspects approached the room and knocked on the door.

Once inside, the suspects, at gunpoint, ordered the occupants to hand over their belongings. The suspects took an undisclosed amount of cash, credit cards, and other personal documentation, then fled the area.


Deputies immediately began canvassing the area in an attempt to locate the suspects. Three suspects were located a short time later in the area of St. Peter Court in Edgewood.

The suspects were identified as Davonn Melvin Parson, 20, of Edgewood; Lance Hugh Michael Walker Jr., 21 of Joppa; and Damon Derrick Hilton, 19, of Edgewood.

The suspects were transported to the Harford County Detention Center for processing, where Parson and Hilton are being held without bail.  Walker was released on his own recognizance.

No further details are being released at this time. Anyone with information about this crime is asked to call Detective Burns with the Harford County Sheriff’s Office at 410-836-5043.