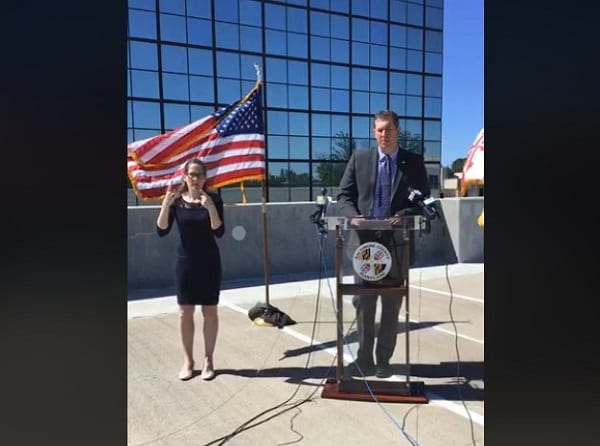 The steps are aimed at addressing systemic challenges and improving relationships between communities and the department.

“The protests we’ve seen in Baltimore County and around the country are shining a bright light on what we already knew—that we have a long way to go to achieve equal justice for African-American communities and that local leaders have a responsibility to take action,” Olszewski said. “We are listening to those in our community who have been marginalized, and we are recommitting to making real change.”

Taken together, the steps announced on Friday aim to improve transparency and accountability in the Baltimore County Police Department, create a more diverse police force, and improve relations between law enforcement officers and the communities they serve.

The steps announced by County Executive Olszewski and Chief Melissa Hyatt are as follow:

“I’m grateful to the men and women of the Baltimore County Police Department who serve honorably and put their lives on the line every day to serve our communities and I believe that these steps will make the Department even stronger,” Olszewski said.

In November 2019, after reviewing traffic stop data showing that African American individuals were issued citations at a higher rate than other individuals, Olszewski created the Workgroup on Equitable Policing to examine policing policies and practices.

Chaired by the County’s Chief Diversity and Inclusion Officer, Troy Williams, the group has met six times, including two community listening sessions, and will issue a report later this year. Going forward, the group will continue to examine traffic stop data and will also:

Williams is the County’s first Chief Diversity and Inclusion Officer, a position created by Olszewski to help address disparities and promote equity and inclusion countywide.

In addition to the Workgroup on Equitable Policing, Olszewski created a Diversity, Inclusion and Equity Community Advisory Council and Employee Advisory Council, both aimed at advancing equity and inclusion in Baltimore County and changing the culture of County government to focus consistently on equity in decision-making.

“Not a single neighborhood association I have ever visited has asked for fewer police on the street to prevent robberies and other crimes,” said Fifth District Councilman David Marks. “Some emails I am now getting want large cuts. I support improving and modernizing our police force; building an inclusive police force that collaborates with the communities it represents; and working with all stakeholders to reduce the root causes of crime.”