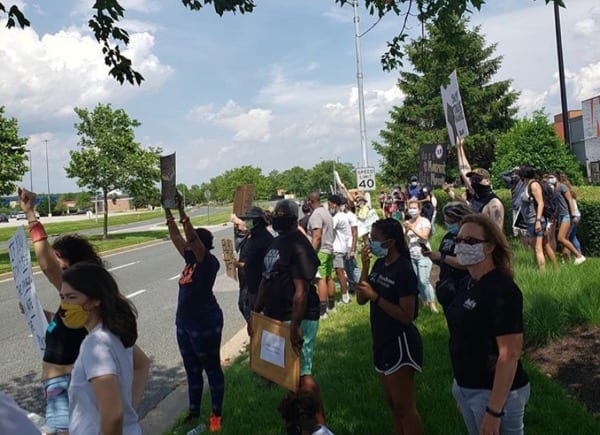 NOTTINGHAM, MD—Protestors gathered peacefully in several different locations throughout Baltimore County and Harford County on Saturday. Demonstrations have been ongoing across the U.S. following the tragic death of George Floyd in Minnesota last month while in police custody.

In White Marsh, protestors assembled along Honeygo Boulevard holding signs that read “Black Lives Matter” and “Being Black Is Not a Crime.”  Many businesses along THE AVENUE at White Marsh reportedly provided snacks and refreshments.  Baltimore County Police Chief Melissa Hyatt also stopped by and chatted with the protestors.

Screenshots from Meyers’ Facebook account that were circulated online included a post dated June 1 that read, “There is one place I bet the protesters/rioters won’t light on fire or break into or even block the road to…the social services buildings.”

Meyers has since posted an apology.

“Obviously, my posts were offensive, and I can’t take them back,” Meyer said in a video post. “I consider myself really close to the black community, and it’s really hitting home. I can’t apologize because nobody’s going to accept it.”


Police were on-hand for the protests at both locations, which remained peaceful.