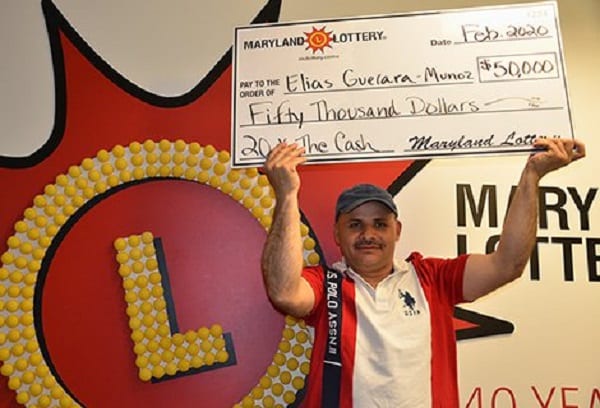 A loyal scratch-off player from Havre de Grace who enjoys trying his luck with a variety of Maryland Lottery games found a top-prize win with the 2020 Cash instant ticket.

The Harford County resident has a score of smaller wins to his name, as well. The 61-year-old purchased one 2020 Cash scratch-off from Putty Hill Liquors on Belair Road his way home from work and revealed the game’s star symbol for an instant $20,200 win.

The lucky player plans to spend some of his windfall on a car he has considered buying.

The winning doesn’t stop there. Putty Hill Liquors at 7938 Belair Road in Baltimore County also wins for selling a top-prize winning scratch-off. The store earns a bonus of $202 from the Maryland Lottery.  The bonus is equal to 1 percent of the prize.


Rainy days and Tuesdays didn’t get one Baltimore County landscaper down, especially when a day off due to heavy rain led to a $50,000 top-prize winning scratch-off.

That’s what happened to Elias Guevara-Munoz of Middle River, who took a chance with a 20X The Cash instant ticket. His selection was quickly rewarded.

The 40-year-old stopped at Bernie’s Liquors on the way home and did something he almost never does – purchase a scratch-off. Elias told Maryland Lottery officials that nearly a year had passed since he last tried his luck.

When he returned home, Elias scratched off the game. Although none of his numbers matched the winning numbers on his scratch-off, the last spot on his instant ticket revealed a 10X multiplier and, underneath, a $5,000 prize.

Elias was sure he had won, but wasn’t sure how much until he scanned his scratch-off to confirm the results using the Maryland Lottery’s smartphone app.

“I was very happy in that moment. I credit God for the luck necessary to win this prize,” said Elias. He plans to invest his winnings and hopes to use the funds and any earnings to purchase his first home.

The win also benefits Bernie’s Liquors, which is located at 1414 Martin Boulevard. For selling a 20X The Cash top-prize winning scratch-off, the Middle River store will receive a $500 bonus from the Maryland Lottery. The bonus is equal to 1 percent of the prize.