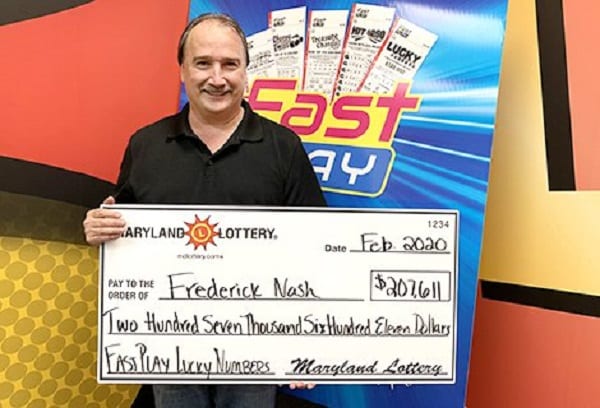 “I looked at it and said, ‘Oh my God, you’ve got to be kidding me,’” recalled Frederick Nash the following day when he claimed his $207,611 prize at Lottery headquarters. The 57-year-old had bought the ticket at the vending machine at Royal Farms #188 in Aberdeen. Stunned, he stepped away from the machine and studied the ticket more carefully, confirming it was a big winner.

The Harford County resident, who is a year out from being eligible to retire, said he stayed awake thinking about how to use his windfall to ease his way into retirement. He was still feeling fully charged when he claimed his prize at Maryland Lottery headquarters and still pondering what to do with the money. Purchasing real estate is a possibility, he said.

The avid Maryland Lottery player picked up a $10,000 prize in June of 2010 on a Powerball ticket. Then, as now, his thoughts turned to family members who had died during a short span in that timeframe, especially his twin sister. She also was a Maryland Lottery fan. Back in 2010, he said, “She was my Lottery partner. We’d play all our numbers together. I would like to think she’s up there smiling because I won.”


One of his friends had told him about FAST PLAY and the $10 Lucky Numbers game, which has a prize that starts at $100,000 and grows with each ticket purchased until the winning ticket is sold. The prize then resets to $100,000.

On that occasion, Frederick bought a ticket, but it was not a winner. His curiosity was sparked, however, so a few days later the loyal player bought tickets for Racetrax and some other games (he is particularly fond of Cash4Life after winning prizes on that game). He added the Lucky Numbers ticket to his purchase.

“It was the best $10 I’ve ever spent!” he proclaimed. Meanwhile, Frederick remains on the hunt for an even bigger prize and plans to keep playing. As he put it, “This is my second win and I’m waiting to hit the big one.”

His lucky retailer also gets a financial boost. For selling a winning FAST PLAY ticket of $100,000 or more, Royal Farms located at 742 South Philadelphia Boulevard earns a $1,000 bonus from the Maryland Lottery.