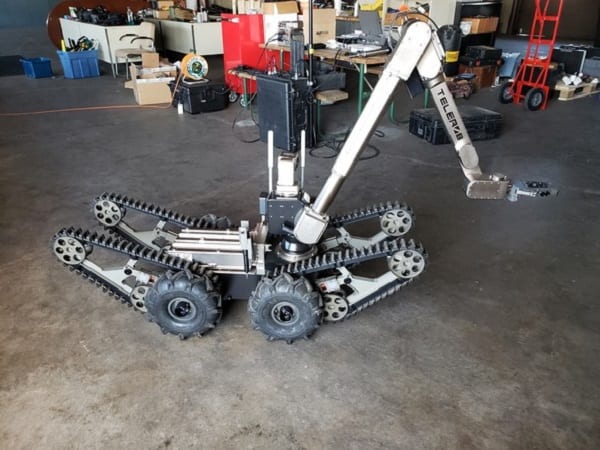 BALTIMORE, MD—The Office of the State Fire Marshal Bomb Squad is prepared to deploy its newest bomb disposal robot. Bomb technicians have been training for months on the new Telerob Telemax PRO. On Monday, February 3, 2020, the robot will be placed into service and ready to mitigate possible explosive hazards.

The Office of the State Fire Marshal Bomb Squad is one of nine National Capitol Region Bomb Squads, commonly referred to as “Metrotech.” The new robot will be a welcomed addition to the current fleet of seven older units the OSFM has spread across the State.

The cost of the Telemax PRO was approximately $400,000.00 and acquired via a grant from the National Capital Region, Urban Area Security Initiative. Among the many functions, the robot is capable of is conducting remote diagnostics, render safe operations on packages, and assist with barricade situations.

One of the most exciting pieces of technology the unit has is hazardous material sampling equipment. This will support HAZMAT teams by sending the robot into a scene versus public safety personnel for collection.

“Bomb Technicians carry out some very delicate work and often risk their lives performing their duties,” said State Fire Marshal Brian S. Geraci. “This addition to our fleet will keep our personnel safer”.

With the new unit being a medium-sized robot with a larger platform, bomb technicians will have the advantage of maneuvering into small spaces such as airplane cabins, train cars, and buses. The new robot weighs significantly less at only 170-pounds compared to the approximate 400-pound units the agency has in service.

“Being able to send a robot into a situation remotely is critical. This new robot will be small enough to enter tight spaces where bomb technicians had to go before, and that was a high-risk environment for them. Confined spaces magnify the effect of explosives,” stated Deputy Chief Duane K. Svites, Bomb Squad Commander. The robot is equipped with more than 30 pre-programmed automatic motion sequences for manipulators and flippers.

Telerob is a German-based company; however, service to the robot can be accomplished through their local office in Erie, Pennsylvania. The robot will be available for responses out of the agency’s office located at Baltimore/Washington International Thurgood Marshall Airport.

See the Telerob Telemax PRO in action below…