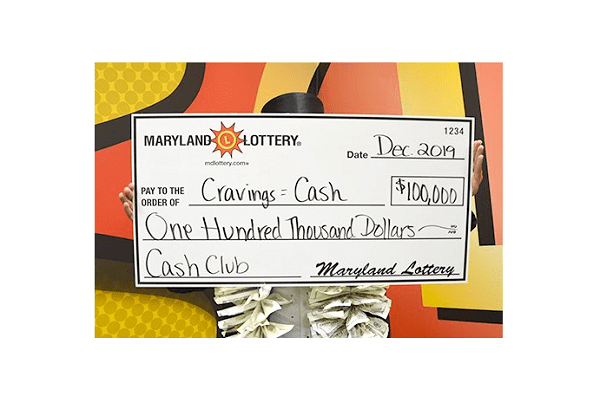 PERRY HALL, MD—While putting in his final hour of work at a local auto shop, mechanic “Cravings = Cash” received a text from his wife, who is seven months pregnant.

“I was told to stop by the store and pick up some of her special cookies,” the Perry Hall resident said while relaxing in the Maryland Lottery Winners’ Circle. “I already knew which kind and where to get them because there is only one store where I know they are sold. That turned out to be a life-changing shopping trip.”

The father of four boys with a daughter on the way usually goes to a Royal Farms store across the street from his job to pick up a scratch-off or two to play at home with his wife. However, her cravings for cookies changed his routine. The 30-year-old headed to a Food Lion in Middle River.

Once there, “Cravings = Cash” picked up cookies and several other items. Before leaving, he decided to buy a scratch-off for the road. He saw that another player was purchasing the $10 Cash Club scratch-off so the Perry Hall man bought the same instant ticket.


“I sat there scratching and listening to the TV in the background,” the winner said. “Then, I see that I matched a number and I was happy to see it was $10,000. When I realized I misread the number, I almost jumped off the couch!”

The winner remained calm so that he didn’t send his pregnant wife into early labor. He looked her in the eye, told her to stay calm and only then did he show her the $100,000 winning scratch-off. She thought he was playing a joke so he pulled out his phone. Using the Maryland Lottery app, the loyal player scanned the prize check at the bottom of the ticket. The app confirmed that they were $100,000 top-prize winners.

“My wife is the technically the winner because without her cravings, we wouldn’t be $100,000 richer!” said “Cravings = Cash” with a hearty laugh. “And, guess what? The Food Lion is now my favorite store!”

Having a baby is just the first of several changes coming to the “Cash” family over the next few months. They plan to spend their windfall on holiday gifts for family members, eliminating their credit card debt and paying off their current car loan. The money they have left will go toward expenses related to their first baby girl.

Food Lion is a winner as well. The store located at 1413 Fuselage Avenue (21220) will receive a $1,000 bonus from the Maryland Lottery for selling a top-prize winning scratch-off.