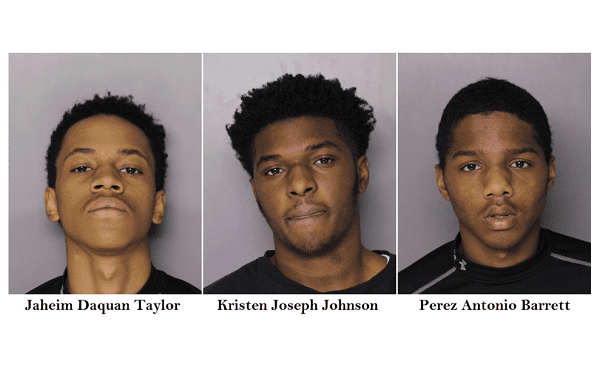 PARKVILLE, MD—Three arrests have been made in the serious assault of a teen in Parkville last week.

One adult and two juveniles have been charged as adults due to the seriousness of the crime.

On November 11, the suspects assaulted the victim behind a building in the 8700 block of Old Harford Road (21234) after they were dissatisfied with a purchase of marijuana sold to them by the victim. The victim advised they hit and kicked him until he was unconscious, then stole his backpack and belongings, including his school laptop which he recovered the following day. The victim did not initially report the incident to police.


Barrett punched the victim in his face first, followed by the other suspects striking and kicking the victim until he fell to the ground and lost consciousness. During the fight, Barrett stated he was going to kill the victim.

A witness from a nearby building saw the suspects assaulting the victim while he was unconscious on the ground, grabbed a shovel and ran to intervene. The suspects all fled the area on foot. The witness, who has some medical training, found the victim unconscious and not breathing. After placing the victim on his side and clearing his airway the victim began to breathe again. He was transported by medics to an area hospital for further treatment.

Detectives have identified and charged three of four suspects involved in both incidents, with Johnson and Barrett both being juveniles charged as adults. All three are held without bail in the Baltimore County Detention Center pending trial.

Detectives are continuing their work to identify the fourth suspect. Anyone who has additional information that can help them in this endeavor is asked to call detectives at 410-887-5456. Callers may remain anonymous.