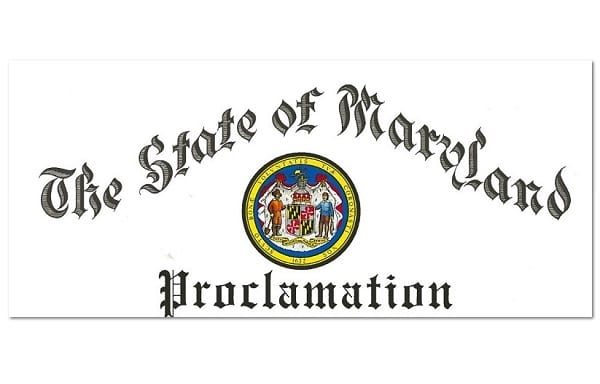 ANNAPOLIS, MD—Governor Larry Hogan on Wednesday issued a proclamation marking October as Domestic Violence Awareness Month. The proclamation was presented by Glenn Fueston, Executive Director of the Governor’s Office of Crime Control and Prevention, to the Maryland State Board of Victim Services.

The first Domestic Violence Awareness Month was recognized in 1987, the same year that the first national toll-free domestic violence hotline was initiated.

“We are so inspired by the countless survivors of domestic violence who show tremendous courage, strength of will, and character to overcome and rebuild their lives,” said Governor Hogan. “Our administration is committed to securing justice for those affected by domestic violence as we work hard to make Maryland safer for all of our citizens.”

Governor Hogan has launched numerous programs and enacted legislation to support victims of domestic and sexual violence, including the Rape Survivor – Family Protection Act, the Maryland “Safe-at-Home” Address Confidentiality Program, and the Victims of Crime Assistance Grant Program. The Governor’s Office of Crime Control and Prevention has allocated more than $33 million to organizations that serve victims of domestic violence during FY19, contributing to a total of more than $121 million since 2015.


“Domestic violence can affect anyone at any stage of life,” said Executive Director Fueston. “Not only does our office work with organizations that support victims and their loved ones, but we also support groups that teach young people what healthy relationships look like so they can avoid perpetuating behaviors that have physically, mentally, and emotionally harmed so many in our state and in our country.”

The Maryland State Board of Victim Services is staffed by the Governor’s Office of Crime Control and Prevention, which works to ensure that crime victims in Maryland are treated with dignity and compassion through the work of its Victim Services Unit, and connects victims with comprehensive resources to help them achieve safety and self-sufficiency.

Formed in 1989, current members include the executive director of the Governor’s Office of Crime Control and Prevention, members of local and state law enforcement agencies, as well as victim services providers, community advocates, and victims’ rights representatives.