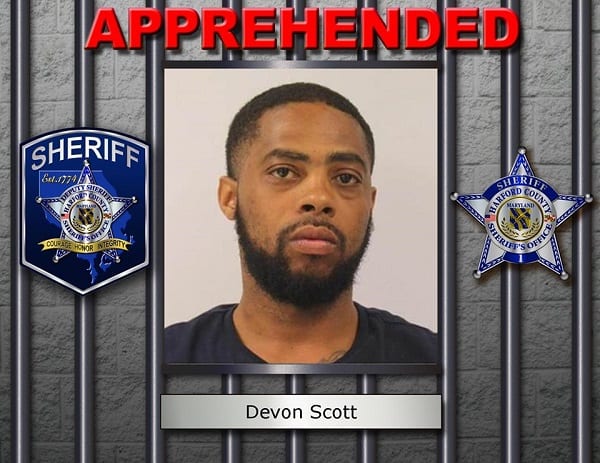 EDGEWOOD, MD – Police say a dangerous suspect is off of the streets.

Devon Scott was taken into police custody in Virginia on Wednesday morning.

“The details of his arrest are still evolving and we will have more information to release Thursday,” said the Harford County Sheriff’s Office. “However, we wanted to let our community know this danger to public safety is off the streets!”

Scott was wanted in connection with an armed carjacking and kidnapping that occurred on Sunday, September 14th.

Upon arrival, officers met with the victim who indicated the suspect, now identified as Devon Scott, had approached her and asked for her to call him a cab before grabbing her arm and attempting to get her into a vehicle. The victim was able to get away and call for help.

Shortly thereafter, officers responded to the 700-block of Monticello Court for a similar incident. The second victim reported that she had been approached by Scott in the Food Lion parking lot.


During this incident, Scott entered the passenger seat of her vehicle, produced a knife, and forced her to drive him to a nearby location. The victim complied and, when they reached the destination, Scott ordered her to stop and began to undress.

The victim was able to escape the vehicle and call 911. Scott then fled the scene in the victim’s car.