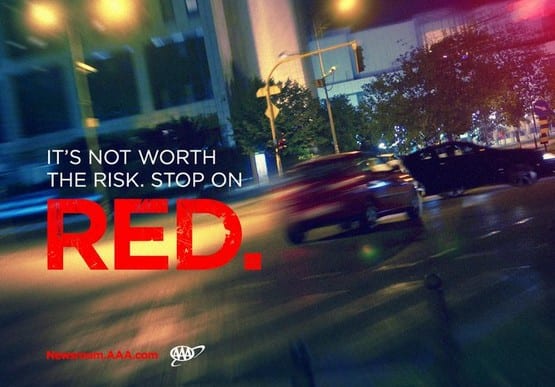 TOWSON, MD –– More than two people are killed every day on U.S. roads by impatient and reckless drivers blowing through red lights, according to data analysis performed by the AAA Foundation for Traffic Safety. The most recent crash data available shows 939 people were killed in red light running crashes in 2017 – representing a 10-year high and a 28% increase since 2012.

With the number of red light running crashes on the rise, AAA is reminding drivers to use caution when approaching intersections, and for pedestrians and cyclists to stay alert when crossing the street.

“Drivers who carelessly run a red light when they could have stopped safely are making a reckless decision that not only jeopardizes their lives but endangers the lives of all road users,” said Ragina C. Ali, Public and Government Affairs Manager at AAA Mid-Atlantic.

In Maryland, 147 people died between 2008 and 2017 due to red light running crashes, according to the National Highway Traffic Safety Administration’s (NHTSA) FARS data analyzed by the AAA Foundation for Traffic Safety.

According to the AAA Foundation’s latest Traffic Safety Culture Index, 85% of drivers view red light running as very dangerous, yet nearly one in three say they ran a red light within the past 30 days when they could have stopped safely. More than two in five drivers also say it is unlikely they will be stopped by police for running a red light. Nevertheless, it’s against the law and if a driver is involved in a deadly crash, it could send them to jail.

“Unfortunately, the data indicates that red light running continues to be a traffic safety challenge. It is incumbent upon motorists to obey traffic laws and change behaviors that lead to fatalities on our roadways. Traffic safety stakeholders must continue to work together to identify effective countermeasures,” Ali added.

While enforcement is the best way to get drivers to comply with any law, it is impossible for police to be at every intersection. The Insurance Institute for Highway Safety (IIHS) found that when properly implemented, red light cameras reduced the fatal red light running crash rate of large cities by 21% and the rate of all types of fatal crashes at signalized intersections by 14%.


“Deaths caused by red light running are on the rise,” said Jessica Cicchino, IIHS Vice President for Research. “Cameras increase the odds that violators will get caught, and well-publicized camera programs discourage would-be violators from taking those odds. Camera enforcement is a proven way to reduce red light running and save lives.”

Proper implementation of red light cameras helps to ensure drivers’ safety and trust in the systems. When using red light camera programs, local governments should incorporate best practices, such as:

Pedestrians and cyclists should also stay safe when traveling near intersections. AAA recommends: