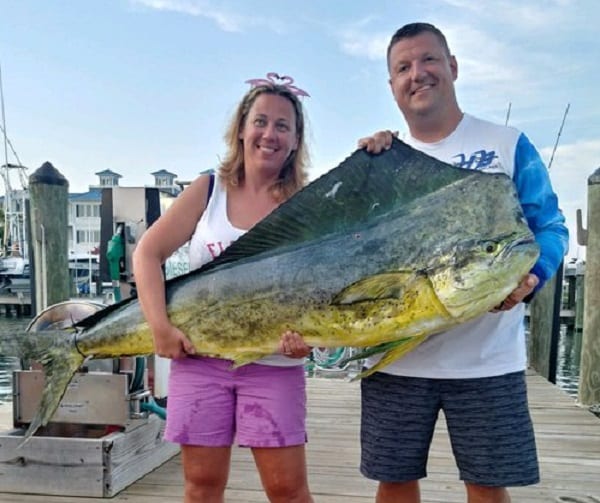 OCEAN CITY, MD – It only lasted three weeks.  A Maryland dolphinfish record that was just set last month has already been broken.

Kristy Frashure was participating in the Poor Girls Fishing Tournament in Ocean City on Friday, August 16, when she caught the 74.5-pound fish.

Frashure and five other friends were fishing off Poor Man’s Canyon when the record fish struck the line.

“It took nearly 20-30 minutes to reel in … it felt like an eternity,” Frashure said. She knew it was a big fish but didn’t know it was a record-breaker. “We were taking bets on how much it weighed.”


A Maryland Department of Natural Resources biologist identified the species as common dolphinfish — Coryphaena hippurus — and its official weight was certified by Bahia Marina.

Frashure’s catch has dethroned Jeff Wright’s three-week-old state Atlantic Division record for common dolphinfish, which was 72.8 pounds. The previous record had been held since 1985.