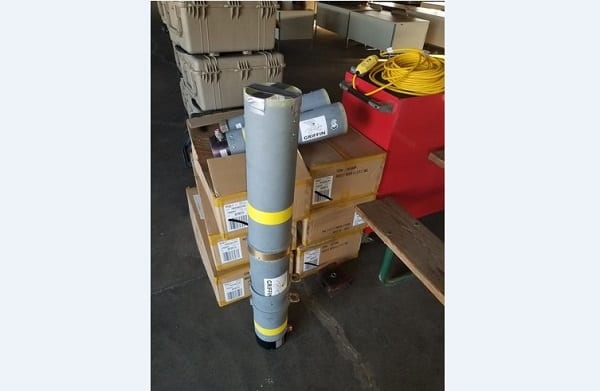 ANNE ARUNDEL COUNTY – The Office of the State Fire Marshal’s Bomb Squad, in conjunction with the Transportation Security Administration and the Maryland Transportation Authority, reported to the Baltimore Washington International Airport at around 5:15 a.m. on Thursday morning for a report of a recovered launch tube located at the American Airlines baggage area.

The inert rocket launch tube, empty of any explosive hazard and inspected by the U.S. military for safety, was brought back on a military flight by a United States Air Force Sergeant as a souvenir of their service abroad.

While the launch tube presents no immediate threat to anyone on the ground, there is a slight chance that it could contain pressurized gas, and was therefore not allowed on the Sergeant’s connecting commercial flight. The Office of the State Fire Marshal’s Bomb Squad took possession of the launch tube until it can be safely returned to the owner.


This is the second recovered launch tube military souvenir that the Bomb Squad has seized in the past two days from BWI Airport. While it is not uncommon for military personnel to return home with momentos from their tours of duty, it is important that they are made aware of the differing regulations for their connecting commercial flights versus their military flights.