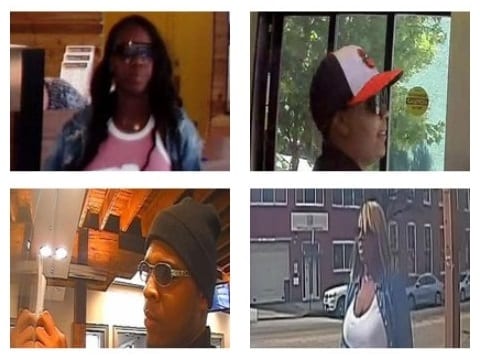 UPDATE: FBI investigators believe the “Mod Squad” suspects attempted to rob a BB&T bank branch in Pikesville at noon today (Saturday, June 15, 2019). Call the number in the story below with any information or tips.

NOTTINGHAM, MD – The Federal Bureau of Investigation is offering a reward for information on the so-called “Mod Squad” bank robbery crew.

The four suspects pictured are responsible for bank robberies in Anne Arundel County, Baltimore County (including Essex and Parkville), and Baltimore City.

In the robberies, the suspects entered the bank branches and one assumed a lookout position in the vestibule or lobby while the other approached the teller line.

The robber at the teller line presented demand notes to bank employees. The tellers provided the suspects money and the suspects then fled in a variety of vehicle types.

The robbery crew consists of two females and two males.

The FBI is offering a reward of up to $5,000 for information leading to the identification, arrest, and conviction of the suspects in these robberies.

Anyone with information on these robberies is asked to call the FBI Baltimore Division Violent Crimes Task Force at 410-265-8080.

Tips can also be submitted at https://tips.fbi.gov.