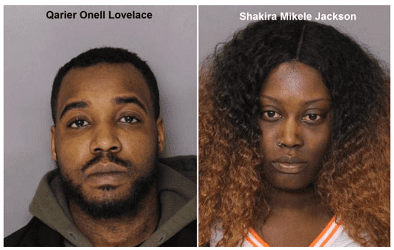 Detectives from the Baltimore County Police Department made two arrests on Monday in connection with a shooting on Handworth Way in Nottingham (21236) that left one man injured on Sunday night.

Police were called to MedStar Franklin Square Medical Center on Sunday evening after a man walked in with a gunshot wound to the lower body.

The victim, 31, stated that he and his girlfriend were involved in an altercation with another couple at around 7:30 p.m. that led to the male suspect shooting him.

The victim was treated at the hospital and released.

Both suspects have been charged with attempted first-degree murder, first-degree assault, and firearms charges.  They are both being held without bail at the Baltimore County Detention Center pending a bail review hearing.