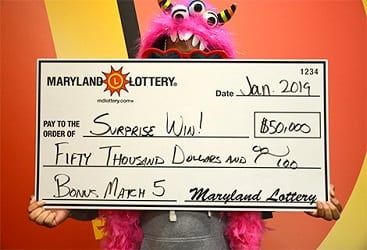 A Baltimore man is a $50,000 Bonus Match 5 winner because of two habits he abandoned in November.

The 28-year-old, who prefers not to deal with change, generally doesn’t use cash for purchases and almost never plays the Maryland Lottery.

On November 4, however, he made a cash purchase at a Royal Farms store in Middle River and got his change in the form of a Bonus Match 5 ticket. That $1 quick-pick ticket for a drawing later that evening would win $50,000, but the holiday season would come and go before he would discover his luck.

“I hate change so I said give me a Lottery ticket,” the winner said. “I’ve probably purchased maybe four tickets. Total. Ever.”

His dad is a regular Maryland Lottery player. He told his dad about buying a ticket and then time passed.

“I forgot I had purchased it,” he said.

On January 13, his father asked the novice player about the ticket.

“It was on the dashboard of my car. I gave it to my dad to check,” says the lucky son, who goes by the nickname “Surprise Win!” “I never checked it until Pops told me to check.”

The surprise came when the dad reported the value of the ticket.

“Surprise Win!” works for the Johns Hopkins Hospital system and said the win will help him achieve home ownership. “I think it’s going to be a good down payment on a house!”

His dad will also share directly in the celebration. Said the winner, “I’m going to get him a nice steak dinner in D.C.”

Also enjoying the good fortune is the Royal Farms located at 9600 Pulaski Highway in Middle River. The Baltimore County retailer earns a $500 bonus for selling a top-prize Bonus Match 5 ticket.