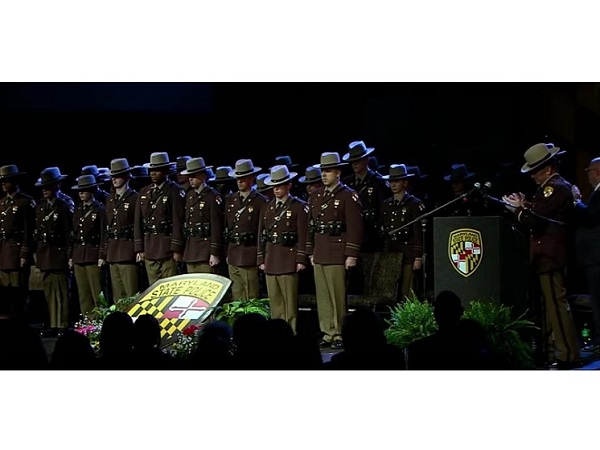 Trooper Candidate Class 153 has completed 27 weeks of a residential police training academy, known as one of most intense and comprehensive state police training programs in the country. During six months of strict discipline and a demanding schedule, the trooper candidates received instruction in criminal and traffic laws, emergency care, emergency driving, physical training, and scenario-based training that included de-escalation and conflict resolution.

“It is my sincere privilege to congratulate the 39 newest members of what is truly the finest state police organization in the entire county,” said Governor Larry Hogan. “The troopers who are taking the oath today are capable of doing extraordinary things, and I have no doubt that the contributions of all of you will help make our already great MSP into an even more outstanding agency. I want to sincerely thank each and every one of you for choosing to serve and protect the people of our great state.”

“You have been trained by the best and you will be expected to uphold and exceed the standards set by those who came before you,” Maryland State Police Superintendent Colonel Woodrow W. Jones III said. “As you accept the incredible responsibilities and authority entrusted to you by the citizens of Maryland, I urge you never to forget that your mission is to serve and protect. You are now a public safety servant who is expected to courageously perform your duties, while upholding our core values of integrity, fairness and service.”

The president of Class 153 is John McNamee, from Philadelphia, Pennsylvania. He previously served in the U.S. Marine Corps where he earned the rank of Sergeant. He was honorably discharged after eight years of faithful service. After leaving active duty in 2007, he was hired as a police officer for the Temple University Police Department and later joined the Malvern Police Department where he was twice named officer of the year.

Among the members of the class, twelve have prior military experience, three previously worked in law enforcement or corrections and four were Maryland State Police cadets. Two are certified paramedics and will be transferring to the Aviation Command following their field training. Nineteen of the recruits have college degrees and another 17 are enrolled in the concurrent Associate of Arts program with Frederick Community College and have been obtaining their degrees as they attend the Academy.

Following a brief period of leave, the new troopers will report to barracks across Maryland to begin eight weeks of practical instruction with field training troopers. Upon successful completion of that training, they will be permitted to patrol alone.

This is the eleventh State Police Academy class to graduate during the Hogan-Rutherford Administration. The next Maryland State Police trooper candidate class is already in training at the Academy. They are scheduled to graduate in July, 2022.

Video from the graduation ceremony can be viewed below…